The UNCCD defines land as “the terrestrial bio-productive system that comprises soil, vegetation, other biota, and the ecological and hydrological processes that operate within the system” (Article 1 of the Convention).

This chapter looks at the meaning and value of land in various ways, including:

The meaning and value of land can change as we become wealthier or do not directly depend on the land for our immediate survival. Furthermore, land is often infused with a feeling of sovereignty and jurisdiction – aligned with different patterns of ownership and use rights – which in turn governs our economic and socio-political interactions and conflicts with others.

All these factors influence attitudes towards land use and the way that land is managed. Nevertheless, keeping land in a healthy state is an essential contribution to human security – access to food and water, the stability of employment and livelihoods, resilience to climate change and extreme weather events, and ultimately social and political security.

Recognizing the perspectives of diverse stakeholders and ensuring their participation in decision-making is a critical first step towards better land management and planning. Land is owned and managed by governments, corporations, communities, and individuals, but we all depend upon the land for our health and well‑being. 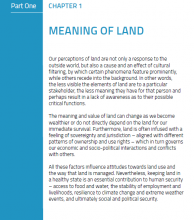 Our perceptions of land are not only a response to the outside world, but also a cause and an effect of cultural filtering, by which certain phenomena feature prominently, while others recede into the background. In other words, the less visible the elements of land are to a particular stakeholder, the less meaning they have for that person and perhaps result in a lack of awareness as to their possible critical functions.