Soil forms the basis of all terrestrial ecosystems, yet soil status and its biodiversity are often virtually ignored in environmental assessments. As an essential component of land resources, soil issues are given particular attention in this chapter.

The term biodiversity refers to the total diversity of life – ecosystems, species, and within-species variation (Wilson, 1988). Its critical importance is underlined by the existence of the Convention on Biological Diversity (CBD) signed in 1992. But despite global conservation efforts, biodiversity, above and below ground, remains in retreat, threatening the Earth’s land base and the services that it supplies to humanity. Five key trends are evident, described in this chapter:

Addressing the Loss of Biodiversity and Soil

There are compelling reasons – both practical and ethical – for halting the extinction event currently devastating the world’s biodiversity and undermining the health and productivity of the land. Seen through the lens of land management, in the long term this means ensuring the survival of large areas of natural ecosystems, supporting wild plant and animal species in managed areas, and restoring and protecting the soil ecosystem.Three elements are critical for biodiversity and soil conservation, presented in this chapter:

These three pathways of action need to be integrated into a coordinated management strategy at broad scales, often referred to as a landscape approach (Sayer et al. 2013). 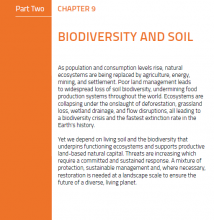 We depend on living soil and the biodiversity that underpins functioning ecosystems and supports productive land-based natural capital. Threats are increasing which require a committed and sustained response. A mixture of protection, sustainable management and, where necessary, restoration is needed at a landscape scale to ensure the future of a diverse, living planet.