Women have a key role in promoting sustainable land management. In developing countries in particular, women are engaged in land use, including food production and preparation, collection of fuelwood and provision of water, fodder, medicinal herbs, fruits and seeds. Nevertheless, women, especially those in rural areas, still lack secure access to land and are disadvantaged because of entrenched gender-specific rights, roles and responsibilities, which can negatively impact their quality of life. This puts rural women at the center of vulnerable groups affected by land degradation, which makes gender-responsive Land Degradation Neutrality (LDN) policies and their implementation imperative at both local and national levels.

Achieving LDN depends on transformative efforts to avoid, reduce and reverse land degradation through gender-equitable measures. Many of the LDN targets and the Drought Initiative goals include the advancement of gender equality and improvement of women’s access to land as co-benefits of sustainable agriculture. Gender mainstreaming is also linked to the achievement of other lSDGs such as food security, improved health and nutrition, reduction of poverty, ecosystem restoration and mitigation of climate change impacts.

Building on the work launched by UN Women, the Global Mechanism of the UNCCD and the International Union on the Conservation of Nature (IUCN) are advising governments on integrating gender perspectives in the development of LDN initiatives. Mandated by the UNCCD Gender Action Plan (GAP), the Science Policy Interface LDN Conceptual Framework and related decisions adopted by the Conference of the Parties, two main documents have been produced to guide country Parties in designing LDN TPP.

A hands-on dedicated guide to mainstreaming gender in LDN TPPs titled “A manual for gender responsive LDN TPP” has been developed by UN-Women in collaboration with IUCN and the Global Mechanism and launched at COP14. The guide, based on the workshop experiences and lessons learned, provides concrete, step-by-step guidance to parties in integrating gender issues and promoting gender equality in the design of transformative LDN projects. The manual is available in English, French, Spanish and Arabic (see below).

A briefing note on “LDN interventions to foster gender equality” highlights the need for gender-balanced participation in land and natural resource governance at the national and landscape levels as well as the necessity of strengthening the legal aspects of land land rights for vulnerable groups including women. Ensuring equal access, use and control over land, forests and other natural resources together with closing the gender gap as part of evidence-based interventions is also key to ensuring that land-based initiatives do not perpetuate historical inequalities or marginalize women’s rights.

Read more about the LDN Interventions to foster gender equality 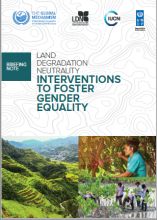 Widespread land degradation threatens food production, water availability, biodiversity and energy security. When land is degraded and usable land becomes scarce, women are uniquely and differentially affected due to their substantial role in agriculture and food production, their reliance on forests, their greater vulnerability to poverty, and their typically weaker legal protections and social status. Across the world, rural women typically work longer hours than men when accounting for paid productive and unpaid reproductive, domestic or care responsibilities. They continue to shoulder most of the unpaid and undervalued work, such as collecting water, cooking, cleaning and caretaking, all while battling the impacts of climate change, unpredictable rainfall, natural disasters and non-yielding gardens.

Women constitute the bulk of people who rely on land in many of the regions most affected by desertification, land degradation and drought. One in three people on earth depend directly on agriculture, while nearly 80% of employed women in least developed countries report agriculture as their primary livelihood. Women are on the frontline struggle to salvage the large area of agricultural land already affected by soil degradation (52%). Food availability fluctuations also impact women’s role in food production and intra-family food distribution, with women often reducing their nutritional intake and that of their children, with dire health consequences. 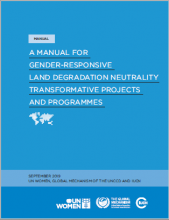 Climate- and human-induced land degradation endangers the future survival of our planet. A new focus on achieving Land Degradation Neutrality (LDN) seeks to spark and grow transformative efforts to avoid, reduce and reverse land degradation through gender- and socially-equitable means. As of July 2019, 122 countries of the 169 countries directly affected by desertification, land degradation or drought pledged to achieve land degradation neutrality at the national or sub-national level. More than 82 countries have already set LDN targets towards halting land degradation by 2030, and 44 of the 70 countries regularly hit by drought are setting up drought management plans to ensure that droughts do not turn into disasters. Many of the target entail co-benefits for sustainable agriculture and food security, and link to the Sustainable Development Goals (SDGs) to advance gender equality, increase women’s equal access to and control over land and natural resources, improve health and nutrition, reduce poverty, and restore ecosystems and climate change impacts.

This manual provides step-by-step guidance to Parties on integrating gender issues and promoting gender equality in the design of transformative LDN projects. It builds on work launched by UN Women, the Global Mechanism of the United Nations Convention to Combat Desertification (UNCCD) and the International Union on the Conservation of Nature (IUCN) in advising governments on integrating gender perspectives in the development of LDN initiatives, as mandated by the UNCCD Gender Action Plan (GAP), the Science Policy Interface LDN Conceptual Framework and related decisions adopted by the Conference of the Parties.