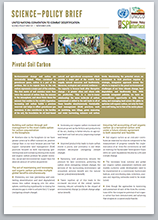 Environmental change and carbon are intrinsically linked. When contained in greenhouse gases, carbon is a part of the problem. But in its organic form in the soil, carbon represents a major part of the solution. The first metre of soil contains more than twice the amount of carbon than the amount in the atmosphere, and about three times the amount that resides in the world’s vegetation. Increasing soil carbon builds a precious reservoir and helps to offset greenhouse gas emissions. It also contributes to the fertility of the soil, the foundation for all land-based natural and agricultural ecosystems, which provide a major part of the world’s food supply, natural resources and biodiversity.