People move for many reasons – economic, social, and political. Now, climate change has emerged as a major driver of migration, propelling increasing numbers of people to move from vulnerable to more viable areas of their countries to build new lives.

The newly released World Bank report, Groundswell: Preparing for Internal Climate Migration, analyzes this recent phenomenon and projects forward to 2050. Focusing on three regions — Sub-Saharan Africa, South Asia, and Latin America – the report warns that unless urgent climate and development action is taken, these three regions could be dealing with a combined total of over 140 million internal climate migrants by 2050. These people will be pushed out by droughts, failing crops, rising sea levels, and storm surges.

But there is still a way out: with concerted action – including global efforts to cut greenhouse gas emissions, combined with robust development planning at the country level –the number of people forced to move due to climate change could be reduced by as much as 80 percent – or 100 million people. 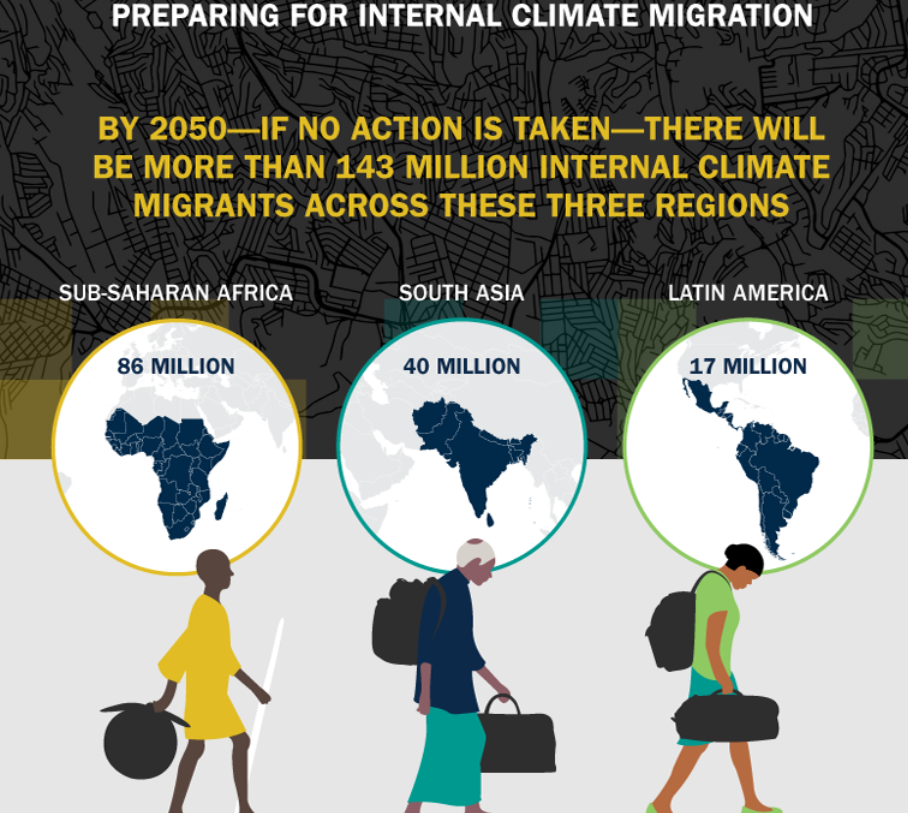 The report finds that countries can take action in three main areas:

Strong global climate action is needed to meet the Paris Agreement’s goal of limiting future temperature increase to less than 2°C by the end of this century. However, even at this level of warming, countries will be locked into a certain level of internal climate migration. Still higher levels of greenhouse gas emissions could lead to the severe disruption of livelihoods and ecosystems, further exacerbating the conditions for increased climate migration.

There is an urgent need for countries to integrate climate migration into national development plans. Most regions have laws, policies, and strategies that are poorly equipped to deal with people moving from areas of increasing climate risk into areas that may already be heavily populated. To secure resilience and development prospects for everyone affected, action is needed at every phase of migration (before, during and after moving).

3. Invest now to improve data on the scale and scope of local climate migration:

More investment is needed to better understand and contextualize the scale, nature, and magnitude of climate change-induced migration. Evidence-based research, complemented by country-level modeling, is vital. In support of this, new data sources, including from satellite imagery and mobile phones, combined with advances in climate information, can help countries improve the quality of information about likely internal migration.

Read also the National Geographic article" 143 Million People May Soon Become Climate Migrants"..The report, Groundswell—Preparing for Internal Climate Migration, also shifts the focus from cross-border migration, which has drawn global attention as refugees and migrants flee war, poverty and oppression, to in-country migration, which involves many more millions of people on the move in search of viable places to live. The 143 million represent 2.8 percent of the three regions’ population.