1.5 billion people, living with soil too salty to be fertile - Global Map of Salt-Affected Soils

Between 20 to 50 per cent of irrigated soils in all continents have grown too salty to be fully fertile, creating significant challenges for more than 1.5 billion people trying to grow their own food.

The information is part of the Global Map of Salt-Affected Soils, a new tool launched this Wednesday by the Food and Agriculture Organization (FAO).

These soils are less fertile and less productive, creating a threat to the global fight against hunger and poverty. They also reduce water quality and soil biodiversity, and increase soil erosion.

With the new map, a joint project involving 118 countries and hundreds of data-crunchers, FAO is hoping to better inform policy makers when dealing with climate change adaptation and irrigation projects.

The launch took place on the opening day of the Global Symposium on Salt-Affected Soils, a three-day virtual conference gathering more than 5,000 experts which runs through Friday.

Saline or sodic soils occur naturally, and are home to valuable ecosystems, including a range of plants that have adapted to the salty conditions.

But they can also be caused by human activity, due to mismanagement, excessive or inappropriate use of fertilisers, deforestation, sea level rises, a shallow water table which affects the rootzone, or seawater intrusion into groundwater that is then used for irrigation.

At the same time, climate change is raising the stakes, with models suggesting that:

According to FAO, salinization (an increase in water-soluble salts) and sodification (an increase in high sodium content) of soils is among the most serious global threats to arid and semi-arid regions, but also for croplands in coastal regions and in the case of irrigation, with wastewater in any climate.

Healthy soils are a pre-requisite to achieve the United Nations’ Sustainable Development Goals (SDGs) and form the basis of FAO’s Four Betters: better production, better nutrition, a better environment, and a better life, leaving no one behind.

The main objective of the Global Symposium on Salt-Affected Soils is to share knowledge on salinity prevention, climate change and ecosystem restoration and to connect policy makers with food producers, scientists, and practitioners.

The gathering will also feature a photo contest offering participants the opportunity to share their testimonies on the effects of soil salinity and sodification.

The event takes place ahead of World Soil Day on December 5, which this year is dedicated to salt-affected soils with the motto, "Halt soil salinization, boost soil productivity".

More on this topic 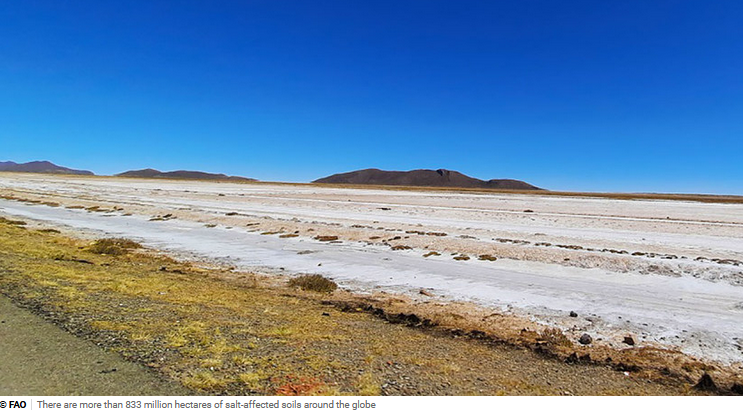