2019 Human Development Report entitled “Beyond income, beyond averages, beyond today: inequalities in human development in the 21st Century,says business as usual will not solve new generation of inequalities

The demonstrations sweeping across the world  signal that, despite unprecedented progress against poverty, hunger and disease, many societies are not working as they should. The connecting thread, argues a new report from the United Nations Development Programme (UNDP), is inequality.

“Different triggers are bringing people onto the streets -- the cost of a train ticket, the price of petrol, demands for political freedoms, the pursuit of fairness and justice. This is the new face of inequality, and as this Human Development Report sets out, inequality is not beyond solutions,” says UNDP Administrator, Achim Steiner.

The 2019 Human Development Report (HDR), entitled “Beyond income, beyond averages, beyond today: inequalities in human development in the 21st Century,” says that just as the gap in basic living standards is narrowing for millions of people, the necessities to thrive have evolved.

A new generation of inequalities is opening up, around education, and around technology and climate change -- two seismic shifts that, unchecked, could trigger a ‘new great divergence’ in society of the kind not seen since the Industrial Revolution, according to the report.

“What used to be ‘nice-to-haves’, like going to university or access to broadband, are increasingly important for success, but left only with the basics, people find the rungs knocked out of their ladder to the future,” argues UNDP’s Pedro Conceição, Director of the HDR Office, which pioneers a more holistic way to measure countries’ progress beyond economic growth alone.

The report analyzes inequality in three steps: beyond income, beyond averages, and beyond today. But the problem of inequality is not beyond solutions, it says, proposing a battery of policy options to tackle it.

The 2019 Human Development Index (HDI) and its sister index, the 2019 Inequality-Adjusted Human Development Index, set out that the unequal distribution of education, health and living standards stymied countries’ progress. By these measures, 20 per cent of human development progress was lost through inequalities in 2018. The report, therefore, recommends policies that look at but also go beyond income, including:

• Early childhood and lifelong investment: Inequality begins even before birth and can accumulate, amplified by differences in health and education, into adulthood. For example, children in professional families in the United States are exposed to three times as many words as children in families receiving welfare benefits, with a knock-on effect on test scores later in life. Policies to address it, therefore, must also start at or before birth, including investing in young children’s learning, health and nutrition.

• Productivity: Such investments must continue through a person’s life, when they are earning in the labour market and after. Countries with a more productive workforce tend to have a lower concentration of wealth at the top, for example, enabled by policies that support stronger unions, set the right minimum wage, create a path from the informal to the formal economy, invest in social protection, and attract women to the workplace. Policies to enhance productivity alone are not enough, however. The growing market power of employers is linked to a declining income share for workers. Antitrust and other policies are key to address the imbalances of market power.

• Public spending and fair taxation: the report argues that taxation cannot be looked at on its own, but it should be part of a system of policies, including public spending on health, education, and alternatives to a carbon-intensive lifestyle. More and more, domestic policies are framed by global corporate tax discussions, highlighting the importance of new principles for international taxation, to help ensure fair play, avoid a race to the bottom in corporate tax rates, especially as digitalization brings new forms of value to the economy, and to detect and deter tax evasion.

The change that is coming goes beyond climate, says the report, but a ‘new great divergence’, driven by artificial intelligence and digital technologies, is not inevitable. The HDR recommends social protection policies that would, for example, ensure fair compensation for ‘crowdwork’, investment in lifelong learning to help workers adjust or change to new occupations, and international consensus on how to tax digital activities – all part of building a new, secure and stable digital economy as a force for convergence, not divergence, in human development.

“This Human Development Report sets out how systemic inequalities are deeply damaging our society and why,” said Steiner. “Inequality is not just about how much someone earns compared to their neighbour. It is about the unequal distribution of wealth and power: the entrenched social and political norms that are bringing people onto the streets today, and the triggers that will do so in the future unless something changes. Recognizing the real face of inequality is a first step; what happens next is a choice that each leader must make.” READ further from the source 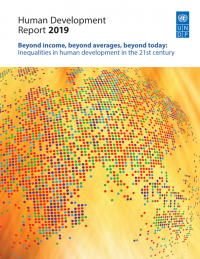