Thirty years ago, UNDP created a new way to conceive and measure progress. Instead of using growth in GDP as the sole measure of development, we ranked the world’s countries by their human development: by whether people in each country have the freedom and opportunity to live the lives they value.

The 2020 Human Development Report (HDR) doubles down on the belief that people’s agency and empowerment can bring about the action we need if we are to live in balance with the planet in a fairer world. It shows that we are at an unprecedented moment in history, in which human activity has become a dominant force shaping the planet. These impacts interact with existing inequalities, threatening significant development reversals. Nothing short of a great transformation – in how we live, work and cooperate – is needed to change the path we are on. The Report explores how to jumpstart that transformation.

The climate crisis. Biodiversity collapse. Ocean acidification. The list is long and growing longer. So much so that many scientists believe that for the first time, instead of the planet shaping humans, humans are knowingly shaping the planet. This is the Anthropocene – the Age of Humans - a new geologic epoch.

Though humanity has achieved incredible progress, we have taken the Earth for granted, destabilizing the very systems upon which we rely for survival. Covid-19, which almost certainly sprang to humans from animals, offers a glimpse of our future, in which the strain on our planet mirrors the strain facing societies. It took Covid-19 very little time to expose and exploit overlapping inequalities, as well as weaknesses in social, economic, and political systems, and threaten reversals in human development.

While the devastating effects of Covid-19 have taken the world’s attention, other layered crises, from climate change to rising inequalities, continue to take their toll. The challenges of planetary and societal imbalance are intertwined: they interact in a vicious circle, each making the other worse.
How should we react to this new age? Do we choose to strike out on bold new paths striving to continue human development while easing planetary pressures? Or do we choose to try—and ultimately fail—to go back to business as usual and be swept into a dangerous unknown?

This Human Development Report is firmly behind the first choice, and its arguments go beyond summarizing well-known lists of what can be done to achieve it.

The report argues that as people and planet enter an entirely new geological epoch, the Anthropocene or the Age of Humans, it is time to for all countries to redesign their paths to progress by fully accounting for the dangerous pressures humans put on the planet, and dismantle the gross imbalances of power and opportunity that prevent change. To illustrate the point, the 30th anniversary edition of the Human Development Report, The Next Frontier: Human Development and the Anthropocene, introduces an experimental new lens to its annual Human Development Index (HDI).

By adjusting the HDI, which measures a nation’s health, education, and standards of living, to include two more elements:

the index shows how the global development landscape would change if both the wellbeing of people and also the planet were central to defining humanity’s progress.

With the resulting Planetary-Pressures Adjusted HDI – or PHDI - a new global picture emerges, painting a less rosy but clearer assessment of human progress. For example, more than 50 countries drop out of the very high human development group, reflecting their dependence on fossil fuels and material footprint.

For example, new estimates project that by 2100 the poorest countries in the world could experience up to 100 more days of extreme weather due to climate change each year- a number that could be cut in half if the Paris Agreement on climate change is fully implemented.

To learn more about the 2020 Human Development report and UNDP’s analysis on the experimental Planetary Pressures-Adjusted HDI, visit http://hdr.undp.org/en/2020-report 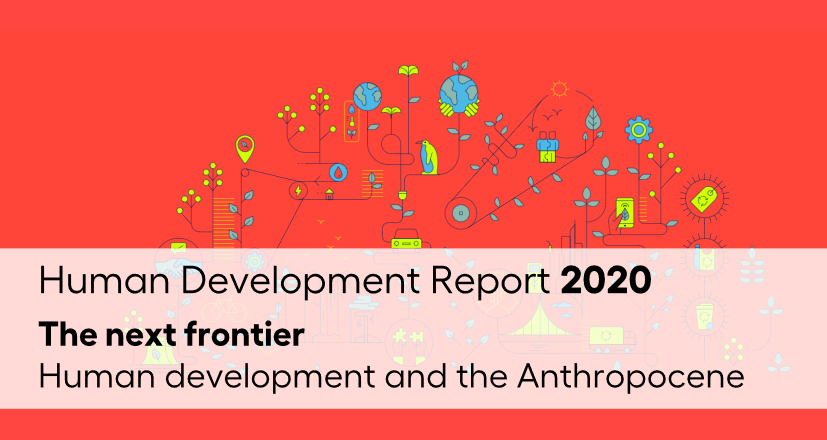