For hundreds of millions of women, providing food to feed their families is a daily imperative. Many of them depend solely on the meager yields of small plots and farms, with little or no access to support when vital crops fail. At the same time, they shoulder the burden of household chores like fetching water, washing and cooking. For these reasons, water shortages and other threats to food security usually affect women far more than men, with ripple effects on socio-cultural, economic, ecological and political issues.

Last month at the fifth UN High Level Political Forum (HLPF) in New York, where progress on Sustainable Development Goals (SDGs) was reviewed, separate discussions on SDG 2 (zero hunger) and 5 (gender equality) may have fallen short in addressing the complexities of the food security-gender gap. The importance of the issue is underlined by statistics: women comprise, on average, 43 percent of the agricultural work force in developing countries, grow as much as 80 percent of all food consumed in Sub-Saharan Africa, and produce 50 percent of all staple crops in Asia. These numbers are, in fact, underestimated―if unpaid work was accounted for, the figures would be even higher.

This year, media reports from various regions elucidated the risks and challenges that women farmers face in times of water stress. In drought-stricken East Africa, women were forced to shoulder a ‘triple burden’–to survive, to care for their families, and to evade sexual violence as they travel farther distances in search of water. 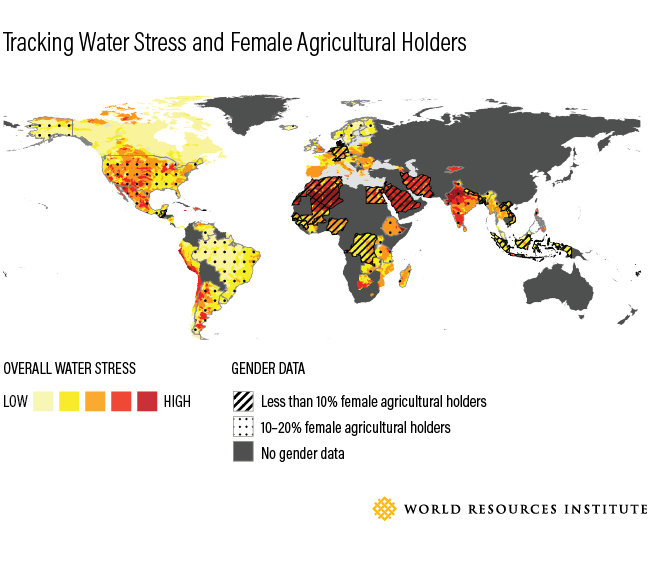 This figure highlights a few key challenges in the water-food-gender nexus:

Participants in the UN discussions agreed that as countries forge ahead towards Agenda 2030―the plan of action to achieve the SDGs―there must be a shift in states’ siloed approaches towards gender equality. Collection of sex-disaggregated data, globally as well as locally, will help inform decision-makers on the unique effects water and food production risks have on women. When implementing new solutions for efficiently managing water resources or increasing yields, officials must act to ensure men and women alike are beneficiaries.

The potential payback is huge. If women had the same access to resources like land, water, agricultural inputs, finance, extension services, information and technology as men, they could increase yields by 20-30 percent. Empowering women in the agricultural sector could pull 100-150 million people out of hunger, making progress towards the SDGs aimed at eliminating hunger and advancing gender equality.