Are We Building Back Better? Evidence from 2020 and Pathways for Inclusive Green Recovery Spending

COVID-19  has led to a global crisis threatening the lives and livelihoods of the most vulnerable by increasing poverty, exacerbating inequalities, and damaging long-term economic growth prospects.

The report, Are We Building Back Better? Evidence from 2020 and Pathways for Inclusive Green Recovery Spending, provides an analysis of over 3500 fiscal policies announced by leading economies in 2020 and calls for governments to invest more sustainably and tackle inequalities as they stimulate growth in the wake of the devastation wrought by the pandemic.

The report draws evidence collected up to February 2021 on The Global Recovery Observatory is an initiative led by the Oxford University Economic Recovery Project (OUERP) and supported by UNEP, the International Monetary Fund and GIZ through the Green Fiscal Policy Network (GFPN).

As of February 2021, the Observatory contains more than 3,500 policies across the world’s 50 largest economies. It is updated weekly. The database itself will be hosted on the Oxford SSEE, GFPN, and UNDP Data Futures websites. Explore the data visualization of the findings on UNDP’s Data Futures Platform.

In 2021, governments can use green recovery spending to bring stronger economic growth and social benefits
• The social co-benefits of carefully designed green policies can include significant improvements to health outcomes, reductions in the cost of energy, and increases in food security, as well as more, safer, and better paid employment opportunities.
• The Are We Building Back Better? report identifies five core green policy areas that can deliver the economic returns needed for a strong recovery whilst addressing pressing environmental and social concerns: green energy, green transport, green building upgrades and energy efficiency, natural capital, and green R&D.
• COVID-19 recovery spending may be the greatest—and perhaps the last —chance for governments to meaningfully spend on environmental and social issues.
• As countries emerge from the immediate health crisis, most economies will require significantly more fiscal recovery stimulus to accelerate a rapid, sustainable, and equitable recovery.

GREEN ENERGY: Focus on renewable energy with emerging interest in hydrogen.
• USD66.1bn in green energy spending has been announced to November 2020. Over a third of this investment (USD25.3bn) has been directed towards new or refurbished renewable energy generation facilities.
• Significant investment has also been announced in hydrogen (USD18.5bn)— with Germany and France emerging as global leaders.

NATURAL CAPITAL: Focus on public parks and green spaces, bringing short and long term economic growth opportunities and positive soci al impact.
• Protecting natural capital has numerous long-run social and economic benefits and growth opportunities, including improving air quality and improved physical and mental health outcomes. However only 3% of recovery spending is deemed positive for natural capital, while up to 17% may negatively impact natural capital, mainly through expanded road transport and defense.
• Almost 35% (USD19.2bn) of total spending (USD56.3bn) has been provided for investment in public parks and green spaces, dominated by a US policy for the restoration of national parks, and a Chinese policy aimed at air, water, and soil pollution prevention.
• Other significant investment include tree planting and biodiversity protection initiatives (USD13.1bn), as well as waterway protection and enhancement (USD18.7bn).

GREEN R&D: Focus on energy and multiple sectors with long-term economic potential in high-tech industries.
• There is strong evidence that green R&D has very large long-term benefits and impels new industries and jobs in later years, however the policy is not particularly well suited to inducing immediate economic growth or jobs.4 5 6The short-term employment benefits are primarily directed at highly skilled workers in high-tech industries and so should be balanced by other support mechanisms directed to lower skilled green professions.
• USD28.9bn in green R&D spending was announced in 2020. Approximately one third of this investment (USD9.7bn) was directed toward green energy R&D. Another USD7.0bn was directed towards ‘other sectoral R&D’ (i.e., not specifically energy, agriculture, or industrial programs), with large spending from EU recovery funds and from the ‘France Relance’ recovery package. 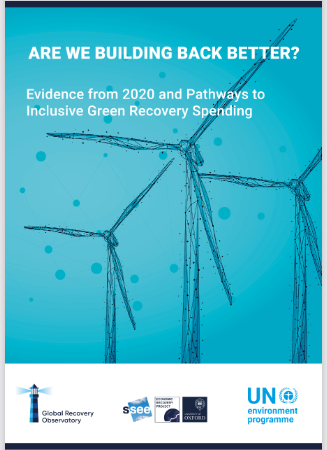