Terrestrial biodiversity is mainly impacted by five direct drivers: land-use change, climate change, overexploitation, pollution and the introduction of invasive species .These drivers, alone and in combination, have had dramatic impacts on terrestrial biota.

The latest Living Planet Index shows that vertebrate populations have declined by 68%, on average, since 1970 (Chapter 1) Impacts vary in different parts of the world, with the hyper-diverse tropical areas – that are critical to global biodiversity conservation – being particularly sensitive to anthropogenic threats.

Despite the increasing impact of a changing climate, three-quarters of all the plant and vertebrate species that have gone extinct since the year 1500 were harmed by over exploitation and/or agricultural activity (with invasive species also a predominant threat) .

Land-use change has profound impacts on local biodiversity. When humans modify habitats, many species can’t persist in the new conditions. Fragmented habitats, comprising remnant habitat patches surrounded by human-disturbed land, may not be large enough to sustain viable populations. Remaining species are those able to cope in altered conditions; as such, global land-use change favours ecological generalists at the expense of rare and specialist species.

A planetary health diet spares land for biodiversity and saves lives. Healthy eating can help to save biodiversity and tackle diet-related disease risk – the leading cause of premature mortality globally.What food we produce and consume, how and where we produce that food, and how much is lost or wasted will determine whether we can provide a healthy diet, within environmental limits, for a global population of 10 billion people by 2050 .

For far too long we have been presented with a trade-off between food security or conservation, with ‘feed the world’ narratives presented as over-riding those to do with conservation. In the age of the Anthropocene this is finally changing, with the realisation that food is failing society both on health and environment grounds.

Many models suggest that food security, nutritional security, climate security, environmental security and livelihood security are possible, and that innovative solutions emerge when these goals are considered as equally non-negotiable These are the five ‘ands’ of the Andthropocene.

Overconsumption in general, and more specifically overconsumption of meat, has important impacts on both human and planetary health. The planetary health diet  is one that retains significant flexibility of choice among major food groups while providing guidance which, if followed, would make it possible to feed a global population of 10 billion while halting the conversion of intact ecosystems, and help reduce premature deaths by 11 million each year ..

Looking ahead: a different way to imagine our future with nature.

Putting nature at the centre of global biodiversity scenario development recognises the fundamental role it plays in human well-being and may help to inspire transformative change. Our values, as humans, influence the choices we make and these underpin the development of a new approach to environmental scenarios, catalysed by the IPBES Task Force on Scenarios and Models. The Nature Futures Framework builds on the different ways in which people experience and value nature .

These human-nature relationships are being used to develop scenarios that explore different socioeconomic development pathways, where one or more of these perspectives dominates, identifying potential trade-offs and co-benefits across the three perspectives.

The Nature Futures Framework is designed to be adaptable across the diversity of local and regional societal, cultural, policy and governance contexts , adding new perspectives to the diversity of human values, relationships with nature, and how these can motivate society to act to bend the curve of biodiversity loss

CHOICE OR CHANCE: COUNTDOWN TO THE FUTURE
Will 2020 go down in history as the year in which COVID-19 served as the catalyst to completely alter our future relationship with nature? Cutting-edge new modelling shows that with urgent action it is still possible to halt loss and reverse the trend of nature’s decline

This Living Planet Report – like others before it, as well as an overwhelming body of other scientific literature – sets out a grim diagnosis for our natural world, and consequently for the human enterprise.

For more than 30 years, since the Brundtland Commission’s Our Common Future report in 1987, scientists, environmentalists and many others have called for dramatic changes to how we produce, consume and protect our world. Now, today’s computing power has been used to develop a proof of concept to do just this – to bend the curve of biodiversity loss.

WHAT IF? SCENARIOS EXPLORING HOW TO BEND THE CURVE OF BIODIVERSITY LOSS Pioneering modelling has provided the first ‘proof of concept’ that we can halt, and reverse, terrestrial biodiversity loss from land-use change.

With an unprecedented and immediate focus on both conservation and a transformation of our modern food system, the Bending the Curve Initiative gives us a roadmap to restore biodiversity and feed a growing human population.We know that nature is being changed and destroyed by us at a rate unprecedented in history, driven largely through the conversion of natural habitats for agriculture and forestry.

While many conservation efforts have been locally successful, they have not been able to stop this global trend: the land demand for food, animal feed and energy provision is increasing, and already impacting the ecosystem services that we depend upon.

Some conservation groups have proposed ambitious targets to save nature, such as conserving half of the Earth. However, there is no evidence as to whether these targets can be achieved, and they would inevitably involve trade-offs – for example, with providing for people’s basic needs such as food and livelihoods  as well as with addressing climate change to keep warming below the target of 1.5°C.

Three of the scenarios picture single types of interventions aimed at bending the curve:
1. The increased conservation efforts (C) scenario included an increase in the extent and management of protected areas, and increased restoration and landscape-level conservation planning. It assumed an extension of protected areas in 2020 to all areas currently covered by the World Database on Protected Areas, the World Database of Key Biodiversity Areas, and Wilderness Areas. These areas were assumed to be efficiently managed so that no land use change detrimental to biodiversity is allowed. In addition, in all areas managed for production activities, financial incentives encouraging both restoration and land-use planning for better biodiversity outcomes are implemented from 2020, starting with low incentives and increasing towards mid-century.

2. The more sustainable production (supply-side efforts or SS) scenario included higher and more sustainable increases in both agricultural productivity and trade of agricultural goods. It assumed that the yield of domestic crops and the productivity of livestock activities will rise slightly more strongly than in the reference scenario at the global scale, with crop yields increasing more rapidly in developing countries so they converge towards the level seen in higher yielding, developed countries. Trade in agricultural commodities across the globe is facilitated, assuming a more globalised economy and reduced trade barriers. For both aspects, assumptions follow those of the IPCC’s ‘sustainability’ scenario (SSP1, van Vuuren, D.P. et al. (2017) 53, instead of SSP2).

3. The more sustainable consumption (demand-side efforts or DS) scenario included reduced waste of agricultural goods from field to fork and a diet shift to a lower share of animal calories in high meat-consuming countries. It assumed that total loss throughout the food supply chain (losses in harvest, processing, distribution and final household consumption) will decline linearly between 2020 and 2050, culminating in a 50% reduction in loss by 2050. Dietary preferences evolve linearly towards 50% less meat consumption by 2050 compared to the reference scenario (animal calories are replaced by vegetal calories), except in regions with a low share of meat in current diets like the Middle East, Sub-Saharan Africa, India, Southeast Asia and other Pacific Islands, where dietary preferences for meat follow the reference scenario.

The three other scenarios modelled different combinations of these increased efforts:
4. The fourth looked at conservation and sustainable production (C+SS scenario).
5. The fifth combined conservation and sustainable consumption (C+DS).
6. The sixth scenario investigated interventions in all three sectors at once. This was known as the ‘integrated action portfolio’ of interventions, or IAP scenario.

Four land-use models translated each scenario into future maps of the share of land occupied by 12 land uses, from built-up areas to primary forests, on a grid of ca. 50km resolution, every 10 years throughout the 21st century. Biodiversity models translated these land-use maps into global and regional biodiversity outcomes.

Using eight models allowed the modelling to not only capture uncertainties, but also to grasp five facets of biodiversity: the extent of suitable habitat, wildlife abundance, compositional intactness of ecological communities, and regional and global species extinctions. 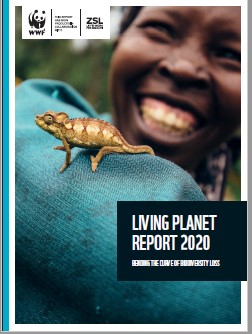 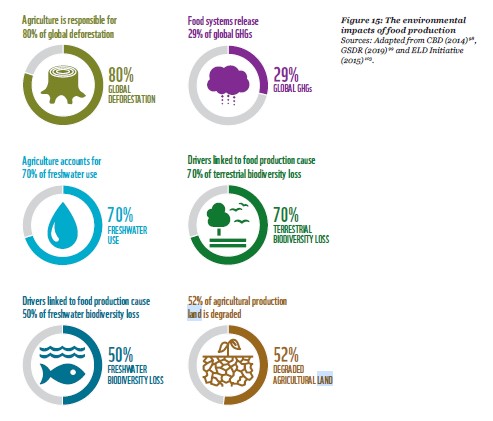