Call for Enhanced Regional Climate Governance in the Arab Region

The Arab region consists of 22 countries – 12 in West Asia and 10 in North Africa. It already suffers from aridity, recurrent drought and water scarcity, and is in many ways among the most vulnerable regions in the world to the potential impacts of climate change and natural disasters. Climate change may exacerbate existing social, environmental and economic pressures on various sectors, such as water, agriculture, infrastructure, aquaculture, health and tourism, and could significantly hinder efforts to achieve other Sustainable Development Goals (SDGs)

The Arab region – stretching across more than 13 million square kilometres of Africa and Asia – covers a variety of climate zones and natural ecosystems ranging from arid deserts to forests and rivers. Climate models project that temperatures in the region may increase by 1.2°C–1.9°C by 2046–2065 and 1.5°C–2.3°C by 2081-2100 under a moderate case scenario, and 1.7°C–2.6°C and 3.2°C–4.8°C, respectively, under the worst case scenario.a Such increases in temperature have implications on natural ecosystems, which are often borderless.
Thus, the impacts of climate change are likely to be felt across borders and shared resources. That is, climate impacts in one country could exacerbate risks in others, especially given the variance between Arab countries in terms of endowments of natural resources, and social and economic conditions. Examples of negative transboundary effects of climate change in the Arab region include:

This EDA Insight explores ways in which advancing regional governance and cooperation can play a role in helping Arab countries address the challenge of climate change, and progress towards the Paris Agreement and Sustainable Development Goals. Read Climate Change and Governance in the Arab region

About:Emirates Diplomatic Academy EDA-led research project examines potential for improved environmental governance in the Arab region that supports the achievement of the UN 2030 Agenda for Sustainable Development by: 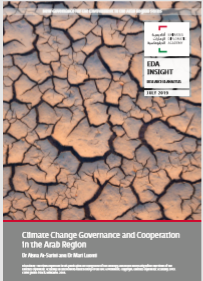