The Climate Transparency Report is the world’s most comprehensive annual review of G20 countries’ climate action and their transition to a net-zero emissions economy.

Developed by experts from 16 partner organisations from the majority of the G20 countries, the report informs policy makers and stimulates national debates. Thanks to comparable and concise information presented in a visually attractive form, the Climate Transparency Report serves as a useful reference for decision makers and actors, and also for those central for climate for whom climate is not central.

The review is based on 100 indicators for adaptation, mitigation and finance and aims to make good practices and gaps transparent. The summary report and 20 country profiles allow the report to be a clear reference tool for decision makers.

The Highlights Report 2021 provides a comprehensive overview of all G20 countries, whether – and how well – they are doing on the journey to transition towards a net-zero emissions economy. The report draws on the latest emissions data and covers 100 indicators on decarbonisation, climate policies, finance and vulnerability to the impacts of climate change. Providing country ratings, it identifies leaders and laggards in the G20.

Key selected figures from the report:

Emissions are rising across the G20, again – warns a report. Despite net zero commitments and updated NDCs, the G20’s climate action is leaving the world far from meeting the 1.5°C global warming limit.

The report also notes some positive developments, such as the growth of solar and wind power among G20 members, with new records of installed capacities in 2020. The share of renewables in energy supply is projected to grow from 10% in 2020 to 12% in 2021. And in the power sector (energy used to make electricity and heat), renewables increased by 20% between 2015 and 2020, and are projected to become nearly 30% of the G20’s power mix in 2021. At the same time, though, experts note that apart from the UK, G20 members have neither short- nor long-term strategies in place for achieving 100% renewables in the power sector by 2050.

In spite of these positive changes, dependence on fossil fuels is not going down. On the contrary, the consumption of coal is projected to rise by nearly 5% in 2021, while the consumption of gas has increased by 12% across the G20 from 2015-2020. The report finds that the growth in coal is mainly concentrated in China – the largest global producer and consumer of coal – followed by the US and India.

At the same time, recent announcements signal that most G20 governments are aware of the need for a transition to low-carbon economies. Net zero targets should be reached by latest 2050 to limit global warming to 1.5°C, something that according to the Climate Transparency Report, has been acknowledged by the majority of G20 governments. By August 2021, 14 G20 members had already committed to net zero targets covering almost 61% of global GHG emissions. 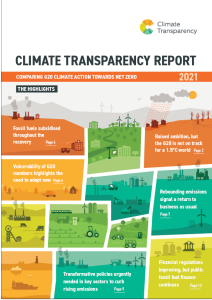