More than 32 million of the world’s poorest people face being pulled back into extreme poverty because of COVID-19, leading UN economists said on Thursday, highlighting data showing that the pandemic is likely to cause the worst economic crisis in decades among least developed countries (LDCs). COVID-19 could see over 200 million more pushed into extreme poverty, new UN development report finds (Source)

In a call for urgent investment and support from the wider international community, the UN trade and development agency, UNCTAD, warned that the new coronavirus risked reversing years of “painstaking progress” in poverty reduction, nutrition and education.

The potentially disastrous fallout from the new coronavirus pandemic could be reversed with urgent investment and support from the international community to help overcome LDCs’ vulnerabilities and improve their manufacturing capacity, Mr. Kituyi insisted.

Turning to concerns about how COVID-19 threatens to push back moves to implement much-needed transformative economic changes in line with the Sustainable Development Goals (SDGs), the UNCTAD chief said that those which had invested most in boosting production capacity were the ones that were likely to weather the global downturn.

The report, which assesses the economic potential and capacity of least developed countries,  also highlights what key measures will help them recover better after the pandemic.

As an example of sustainable industrial change, it cited Uganda’s Kayoola Bus initiative, which  has established the domestic production of buses powered mainly by renewable energy, to tackle the environmental and health problems of transport-related air pollution.

The full text report "The Least Developed Countries Report 2020: Productive Capacities for the New Decade "you can find here, ( also by chapters ) 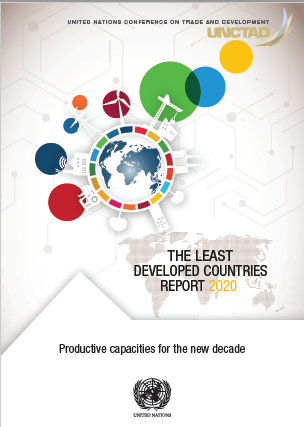