According to the new Tracking SDG 7: The Energy Progress Report released today by the International Energy Agency (IEA), the International Renewable Energy Agency (IRENA), the United Nations Statistics Division (UNSD), the World Bank, and the World Health Organization (WHO), significant progress had been made on various aspects of the Sustainable Development Goal (SDG) 7 prior to the start of the COVID-19 crisis. This includes a notable reduction in the number of people worldwide lacking access to electricity, strong uptake of renewable energy for electricity generation, and improvements in energy efficiency. Despite accelerated progress over the past decade, however, the world will fall short of ensuring universal access to affordable, reliable, sustainable, and modern energy by 2030 unless efforts are scaled up significantly.

The preparatory process of the 2020 edition--6th edition of this report--was chaired by IRENA. This year's edition introduces tracking for a new indicator, 7.A.1, on international financial flows to developing countries in support of clean and renewable energy. 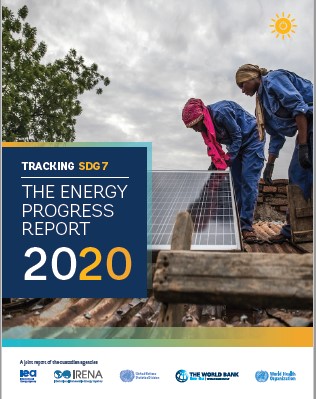