Natural disasters are costing farmers in the developing world billions of dollars each year, with drought emerging as the most destructive in a crowded field of threats that also includes floods, forest fires, storms, plant pests, animal diseases outbreaks, chemical spills and toxic algal blooms.

According to a new report  from the Food and Agriculture Organization of the United Nations (FAO), between 2005 and 2015 natural disasters cost the agricultural sectors of developing country economies a staggering $96 billion in damaged or lost crop and livestock production.

Half of that damage — $48 billion worth — occurred in Asia, says the report, which was launched today at a conference in Hanoi convened by Viet Nam's government in collaboration with FAO.

Drought — which recently has battered farmers in all corners of the globe, North, South, East and West — was one of the leading culprits. Eighty-three percent of all drought-caused economic losses documented by FAO's study were absorbed by agriculture, with a price tag of $29 billion.

But the report also details how multiple other threats are taking a heavy toll on food production, food security, and people's livelihoods.

"The agriculture sectors — which includes crop and livestock production as well as forestry, fisheries and aquaculture — face many risks, such as climate and market volatility, pests and diseases, extreme weather events, and an ever-increasing number of protracted crises and conflicts," said FAO Director-General José Graziano da Silva.

"This has become the ‘new normal,' and the impact of climate change will further exacerbate these threats and challenges," he said.

"Disaster risk reduction and management must therefore become an integral part of modern agriculture. Building a more holistic and ambitious disaster-resilience framework for agriculture is crucial to ensuring sustainable development — which is a cornerstone for peace and the basis for adaptation to climate change," argued the FAO Director-General. 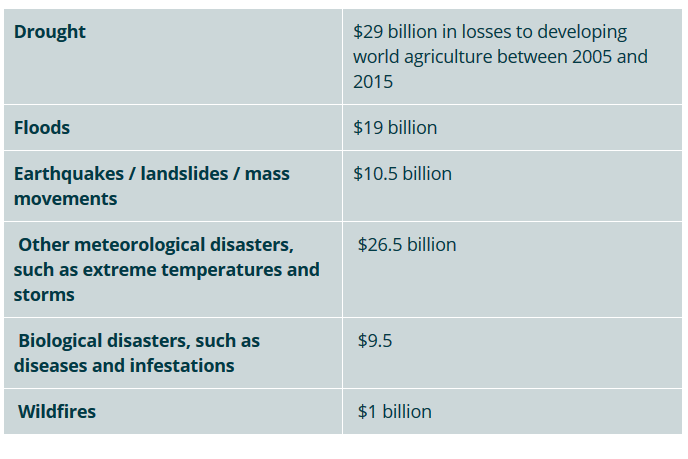 The geography of disaster

In Asia — the world region where agriculture was most affected by disasters — floods and storms had the largest impacts, but Asian agricultural systems are also heavily affected by earthquakes, tsunamis and extreme temperatures.

For both Africa as well as for Latin America and the Caribbean, drought is the costliest type of disaster — causing crop and livestock losses of $10.7 and $13 billion in those regions, respectively, between 2005 and 2015.

Crop pests and animal diseases were also among the most expense-inducing disasters for African farmers, notching up $6+ billion in losses in that same period.

And across the globe, Small Island Developing States (SIDS) are particularly vulnerable to natural disasters, in particular tsunamis, earthquakes, storms  and floods. Economic losses in SIDS stemming from disasters jumped from $8.8 billion for the period 2000-2007 to over $14 billion between 2008-2015, the report shows.

About the conference in Hanoi

How FAO helps countries cope with and respond to disasters