Donors must double aid to end hunger - and spend it wisely

Donors must double aid to end hunger - and spend it wisely- Ceres2030’s new research shows that by doubling their investments between now and 2030, donors could help end hunger, double smallholder farmer incomes and protect the climate.

Ceres2030’s new research reveals that donor governments must spend an additional USD 14 billion a year on average until 2030 to end hunger, double the incomes of 545 million small-scale farmers, and limit agricultural emissions in line with the Paris climate agreement. This means roughly doubling the amount of aid given for food security and nutrition each year, and must also be accompanied by an additional USD 19 billion a year from low- and middle-income countries' own budgets.

"agricultural interventions are more effective with a population that enjoys at least a minimum level of income, education, with access to networks and resources such as extension services and robust infrastructure."

Hunger is rising, reversing decades of progress. An estimated 690 million people are hungry, an increase of 60 million over the past five years, according to the UN. We predict that an additional 95 million people will be living in extreme poverty and hunger due to the COVID-19 pandemic. Perversely, it is poor farmers and their families—those who produce an important share of the world’s food, and whose livelihoods depend on food and agriculture—that are among the most likely to experience hunger.

"..modelling shows that an additional investment of USD 14 billion from donors and USD 19 billion from affected countries on average each year between now and 2030 could lift 490 million people out of hunger, reducing the prevalence of undernourishment below 3% in every country worldwide. At the same time, the funding could double the incomes of 545 million small-scale farmers on average, and maintain greenhouse gas emissions in agriculture below the commitments made in the Paris climate agreement."

Read further from the source: 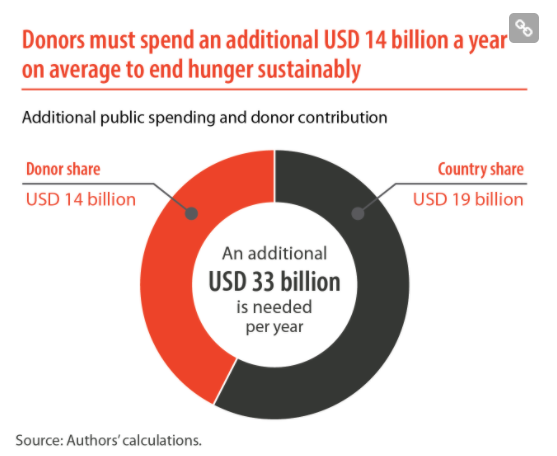