An Eco-wakening: Measuring global awareness, engagement and action for nature

The natural world is under threat. In the Amazon, more than 150 acres of rainforest are lost every minute of every day. Wildlife population sizes have seen an alarming average drop of 68% since 1970. And this isn't just about the natural world - it's about our world as well. We depend on nature for our own survival, livelihoods, happiness, and as seen with COVID-19, our health - the destruction of nature only increases the chances of future pandemics emerging. Our broken relationship with nature is putting the future of people and planet at risk.

Humanity may be responsible for the destruction of our planet - but humanity is also waking up...and stepping up.

Findings from a new eye-opening report by the Economist Intelligence Unit (EIU) commissioned by WWF, spanning 54 countries that hold 80% of the world's population, reveal that we're entering a new era of change - perhaps the most important era for the future of humanity and our planet.

1. MORE PEOPLE ARE GIVING NATURE A VOICE, ONE POST AT A TIME. On Twitter alone, the number of posts related to nature loss and biodiversity has increased by 65% since 2016.

2. MORE PEOPLE ARE AWARE OF THE ISSUES - AND WANT TO BE INFORMED. The popularity of Google searches for terms related to biodiversity and nature loss, relative to all searches, have grown by 16% globally since 2016.

3. MORE PEOPLE THAN EVER ARE IN SEARCH OF A SUSTAINABLE FUTURE. The popularity of Google searches relating to sustainable goods has increased by 71% globally since 2016.

CONSUMERS ARE NOT AFRAID TO TAKE A STAND
In a 2019 online survey, 50% of respondents worldwide said they switched products or services because a company violated their values. The number one reason cited for the switch was to support products or services that ‘protect the environment.’

...AND BUSINESSES ARE LISTENING

...AND THEIR VOICES ARE BEING HEARD
In June 2020, seven major European funds threatened to withdraw their 2 trillion US dollars-worth of investments from Brazil unless key decision makers in the country did something to stop the surging destruction of the Amazon rainforest

As of 2019, legislations restricting single-use plastic items have been passed in 127 countries, following sustained global protest about the environmental harm that was being caused.

The findings are based on an extensive literature review, insights from an expert panel and a modelling exercise conducted by The EIU between May and December 2020.

Nature is disappearing. Since 1970, mammal, bird, fish, amphibian and reptile populations have seen an alarming decrease in size of 68% on average

Social media, news and Google trends analysis: The research framework includes more traditional indicators (e.g. opinion surveys) but the majority of the findings discussed in this report are based on new analysis of social media engagement, news media coverage and Google search data.

The top 20 key influencers include the Pope, Hillary Clinton, film star Leonardo di Caprio, Indian Prime Minister Narendra Modi, and organisations such as the BBC and the New York Times.

Does online activism stimulate real-world change, or is it all just hot air? While some critics question the value of digital activism, there is no doubt that technology has already facilitated significant social and political change in some countries.

Recent actions by key decision-makers. For example “Green development” is highlighted as a priority in the draft of China’s modernisation plan for the next 15 years, which was unveiled in March 2021 at the 13th National People’s Congress in Beijing. President Xi Jinping and fellow lawmakers from north China’s Inner Mongolia Autonomous Region also discussed ecological conservation. Inner Mongolia is seen as China’s “Green Great Wall”, according to Mr Xi, who also discussed desertification control and forest protection with colleagues.

If people care, why is nature still under threat? We know that awareness, engagement and action for nature are greater than ever before. At the same time, the rate of nature loss appears to be continuously accelerating.

Consumer demand has pushed more and more industries to integrate sustainable practices into their goods and services. However, the cost of re-orienting a business model towards sustainability is expensive.

While many people are actively campaigning on behalf of nature and public awareness is steadily increasing, more needs to be done to help the general population make the connection between their own existence and the health of the planet.

This year can be a crucial turning point to reverse nature and biodiversity loss. In only a few months time, world leaders are scheduled to attend a key United Nations conference to negotiate a global framework for addressing the nature crisis. The decisions they make during this conference will impact decades to come, in all aspects of government, business, and civil society. 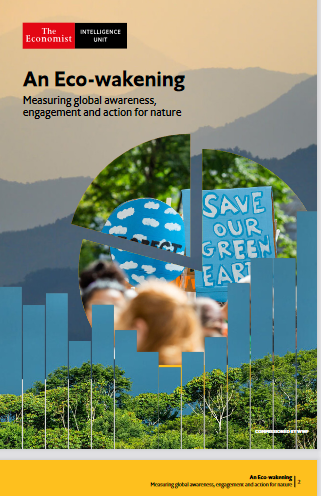