The Economic Case for Nature- Protecting Nature Could Avert Global Economic Losses of $2.7 Trillion Per Year

Protecting Nature Could Avert Global Economic Losses of $2.7 Trillion Per Year. A new World Bank report estimates that the collapse of select ecosystem services provided by nature – such as wild pollination, provision of food from marine fisheries and timber from native forests – could result in a decline in global GDP of $2.7 trillion annually by 2030.

The Economic Case for Nature underscores the strong reliance of economies on nature, particularly in low-income countries. The report highlights that:

Economies rely on the flow of goods and services generated by nature (such as food, raw materials, pollination, water filtration and climate regulation), but nature is under unprecedented threat.

The Economic Case for Nature is part of a series of papers by the World Bank that lays out the economic rationale for investing in nature and recognizes how economies rely on nature for services that are largely underpriced.

This report presents a first-of-its-kind integrated ecosystem-economy modelling exercise to assess economic policy responses to the global biodiversity crisis. Modeling the interaction between nature’s services and the global economy to 2030, the report points to a range and combination of policy scenarios available to reduce the impact of nature’s loss on economies.

This modeling framework represents an important stepping-stone towards ‘nature-smart’ decision-making, as it seeks to support policymakers who face complex tradeoffs involving the management of natural capital, and hence achieving growth that is resilient and inclusive.

The report assesses the link between the decline of select ecosystem services—pollination of crops by wild pollinators, climate regulation from carbon storage and sequestration, provision of food from marine fisheries and provision of timber—and the performance of key sectors that rely on these services, such as agriculture, forestry, and fisheries sectors, and related industries.

The integrated model is used to compare the baseline (economy-only) scenario with a set of scenarios that simulate the interactions between ecosystems and the global economy to 2030.

If no action is taken, 46 million hectares of natural land may be converted by 2030. There are implications for agricultural yields, the fisheries sector, and the output of industries dependent on timber, leading to a drop in Gross Domestic Product (GDP) of up to $225 billion.

The report analyses a scenario where three services - wild pollination, provision of food from marine fisheries and timber from native forests – collapse. The model shows a drop of $2.7 trillion (2.3% annually) in global real GDP in 2030, compared to the baseline scenario. Relative impacts are most pronounced in low-income and lower middle-income countries, where drops in 2030 GDP may reach 10 percent (Figure 1).

The combination of policies considered in this report—decoupling of subsidies to farmers, global and local forest carbon payment schemes, and public investment in research and development (R&D) —can avoid up to 50 percent of conversion of natural land and result in an increase in global real GDP in 2030 in the order of $50-150 billion.

Investment in agricultural technology substantially improves environmental outcomes, particularly in developing countries. Coordinated action at the global level is key to success of such policy reforms.

The model shows that achieving the 30x30 goal results in a 0.1 percent decline of global GDP in 2030, compared to business-as-usual. The global loss is even smaller, that is, 0.01 percent when GDP is adjusted for the climate change mitigation benefits of extra conservation of natural areas.

From a global perspective, the economic loss caused by restrictions to land use is almost entirely offset by economic gains resulting from improved provision of ecosystem services. Political economy, both between and within countries, poses the biggest challenge going forward, however, and will require appropriate policies in support of a transition that is inclusive and equitable.

The coming months provide an important window of opportunity to put planetary and human health on the same course. The post-2020 global biodiversity framework will provide a unique opportunity to mobilize a diverse set of stakeholders—economic, financial, and private—and commit them to decisive action to reverse nature loss through conservation, sustainable use, and equitable sharing of the benefits of biodiversity.

COP-26 of the United Nations Framework Convention on Climate Change can provide further momentum because healthy ecosystems support climate change mitigation and increase the resilience of society to the increased frequency and intensity of extreme weather and climate events. Domestic and internationally coordinated policy action on both climate and biodiversity would make global conservation targets even more achievable 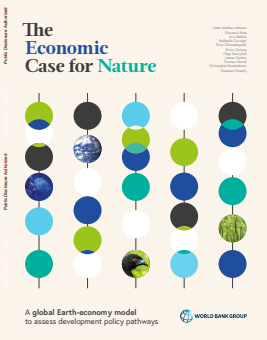