This report evaluates total disaster-related economic losses and fatalities between 1998 and 2017. The report finds that between 1998 and 2017, climate-related and geophysical disasters killed 1.3 million people and left a further 4.4 billion injured, homeless, displaced or in need of emergency assistance. While the majority of fatalities were due to geophysical events, mostly earthquakes and tsunamis, 91% of all disasters were caused by floods, storms, droughts, heatwaves and other extreme weather events. 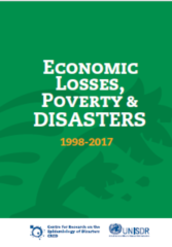