THE IMPACT OF FOOD, FEED AND FIBRE
Plants and animals provide most of our food, clothing and footwear. This means that food, feed (animal)and fibre (for clothing) all compete for arable land. And demand is growing due to population growth and increasing global middle classes.
Food

Land degradation
Food, feed and fibre must also compete with expanding cities and the fuel industry, which are also gobbling up land at rapid rates. The end result is that land is being converted and degraded at unsustainable rates.

WHAT WE CAN DO

With changes in consumer and corporate behaviour, and the adoption of more efficient land use planning and more sustainable land management practices, we will have enough land to meet the demand for essentials and for a wider array of goods and services.8
Urbanization and globalization means that land degradation is driven by demand for products that are consumed in urban areas or other countries. This puts responsibility land degradation on the doorstep of every individual consumer. The choices people make when buying food or clothing have long-term consequences on the land, and on the future generations.
Consumers can make a positive difference because government policy and suppliers are extremely sensitive to individual market choices. If every consumer were to buy products that do not degrade the land, suppliers will cut back the flow of these products, and send a powerful signal to the producer of the change needed to stay in business.  Changing our diet and shopping behaviours can free up land for other uses and lower carbon emissions. Dietary change alone can free up between 80 and 240 million hectares of land.

Specific actions consumers can take include:

DID YOU KNOW: One-third of all food produced each year is lost or wasted, while 821 million people are undernourished.This is equivalent to 1.3 billion tonnes of food with a footprint of 1.4 billion hectares, close to 30% of the world’s agricultural land area. This represents a surface larger than Canada and India together. ( UNCCD Background paper for 17 June 2020 Desertification and Drought Day Food. Feed. Fibre. ) 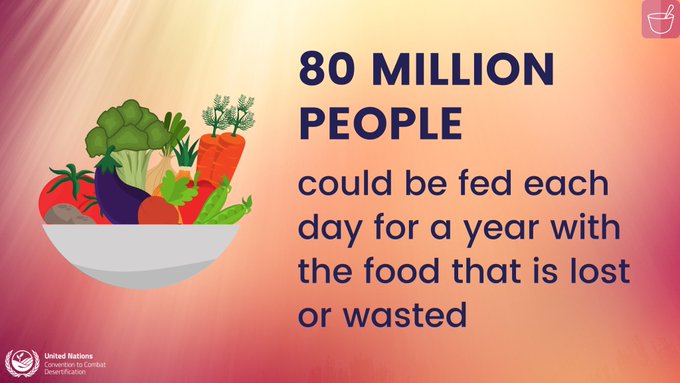