This paper will discuss emerging trends in gender dimensions of land degradation, making an argument for the importance of taking gender roles into account when making policies and laws to promote land degradation neutrality.

Women comprise 43% of the world’s agricultural labor force, rising to 70% in some countries.4 In Africa, for instance, 80% of agricultural production comes from small-holder farmers, who are mostly rural women. Despite their majority in the small-holder agricultural sector, women typically don’t have secure control over their farmland or over its productive resources, especially commercially marketable produce.

This lack of control is linked to land ownership rights in rural areas, which habitually favor men;  women’s access to the land, meanwhile, is mediated by their relationship to the male owner. Such arrangements are rooted in the traditional patriarchal norms of granting ownership over society’s productive resources. 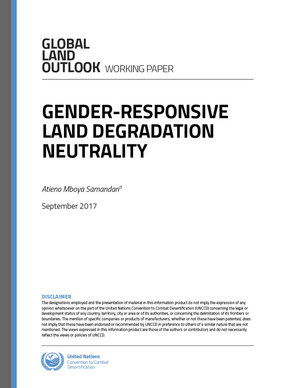 The GLO Working Papers Series is a supplementary set of publications that cover a wide variety of strategic issues related to land management and planning. The series aims to provide an expanded format as well as an additional vehicle for those authors invited to contribute to the GLO main report.

A number of working papers were commissioned to provide insights and analysis on the major themes addressed in this first edition of the GLO. The series is expected to be an ongoing activity that will contribute to successive Outlooks.