Global Leaders Call: No Success at COP26 without a fair deal for Africa- State and Trends in Adaptation Report 2021

26 October 2021 global leaders, hosted by President Uhuru Kenyatta, spoke at the launch of the Global Center on Adaptation (GCA) “State and Trends in Adaptation in Africa Report 2021 – How Adaptation Can Make Africa Safer, Greener and More Prosperous in a Warming World” (STA21) to call for COP26 and development partners to increase resources to the Africa Adaptation Acceleration Program (AAAP).

Without adaptation action, projections estimate that climate change will lead to an equivalent of 2 percent to 4 percent annual loss in GDP in the continent by 2040, with the poor, women, and excluded populations bearing the brunt of the impact. Yet the GCA report shows that the benefits of adaptation measures are frequently more than twice or as much as five times or greater than their costs. In addition, moving quickly to adapt is especially beneficial, with a benefit-cost ratio for early action of at least 12 to 1.

Speaking during the launch event, Ban Ki-moon, 8th Secretary General of the United Nations, Chair of the GCA spoke in support of the African-led and African-owned Africa Adaptation Acceleration Program, as a pathway to mobilizing the balance of the promised $100 billion in annual international climate finance. He highlighted AAAP as an important opportunity to realize a resilient and prosperous future for Africa:
“The climate emergency has Africa at the cross-roads. Business as usual is a sure-fire route to chaos. But adapt to it and Africa will thrive.”

Patrick Verkooijen, in his inaugural annual lecture as GCA CEO, commented:
“Africa will suffer higher GDP losses than most other regions of the world. These impacts can only be reduced with adaptation. Thousands of lives and millions of livelihoods have already been sacrificed in Africa because we are far from delivering what is needed in adaptation today. For COP26 to succeed, Glasgow must deliver for Africa. To do so, it must bring more ambition and more finance to help Africa adapt to the pace of a climate emergency devastating the continent with increasingly serious consequences for the world’s poorest and most vulnerable.”

Dr. Akinwumi Adesina, President of the African Development Bank Group:
“AAAP provides a unique opportunity for wealthier nations to meet their commitments and help Africa tackle the consequences of climate change. I am optimistic that our partners will deliver the first round of financing of $6 billion to $8 billion that we need for the Africa Adaptation Acceleration Program in 2021.”

Patricia Espinosa, Executive Secretary of the United Nations Framework Convention on Climate Change (UNFCCC) spoke about the importance of finance for adaptation:
“Key to success in adaptation and resilience — like so many other issues related to climate change — is adequate finance. At COP26 we will continue to call for wider-ranging and comprehensive financial support for developing nations. The $100 billion pledge was a commitment that was made in the UNFCCC process more than 10 years ago. It’s time to deliver.”

Kristalina Georgieva, Managing Director, Managing Director, International Monetary Fund said:
“Effects of climate change in Africa threaten lives, jobs, and the substantial economic and development progress of the past two decades. As the GCA State and Trends in Adaptation report rightly says, adaptation is a necessity and must go hand-in-hand with reducing poverty and improving livelihoods. African countries need to do their part and have created the Africa Adaptation Acceleration Program but cannot do it alone. Along with bold action to reduce emissions at COP26, the international community must deliver on its commitment to provide at least $100 billion a year in climate finance for developing countries where financial flows for adaptation must be on a par with financial flows for mitigation. This is essential for securing a sustainable global recovery.”

Uhuru Kenyatta, President of Kenya said:
“This program, in principle, aims to scale up and accelerate adaptation here in Africa by providing financial and technical support to African adaptation efforts. This initiative greatly paves the way for the continent to manage its climate related challenges. It is important to appreciate that effective climate adaptation will require a paradigm shift that harnesses the full potential of science and innovation.”

Ngozi Okongo-Iweala, Director-General, World Trade Organization said:
“Ensuring that supply chains are resilient can be a key component of Africa’s adaptation strategies. This will require significant efforts to climate-proof key trade-related infrastructure.  Initiatives like the WTO’s Aid for Trade can help mobilize investment in climate-resilient infrastructure.

Felix Tshisekedi, President of the Democratic Republic of Congo and Chair of the African Union said:
“Climate change could wipe out 15 per cent of Africa’s gross domestic product by 2030. This means an additional 100m people in extreme poverty by the end of the decade. This is a cruel fate for a continent that contributes so little to global warming. Our way out is to strengthen our ability to respond and adapt to climate change. That’s why the African Union, working with the Global Center on Adaptation, the African Development Bank and other partners, is endorsing the Africa Adaptation Acceleration Program.”

The blueprint for adaptation actions for the African continent set out in the GCA report “State and Trends in Adaptation in Africa Report 2021” is vitally important. We must ensure that trade policies play a key role to play in delivering affordable and accessible climate adaptation solutions to Africa.

Notes to Editors:
About the Global Center on Adaptation
The Global Center on Adaptation (GCA) is an international organization which works as a solutions broker to accelerate action and support for adaptation solutions, from the international to the local, in partnership with the public and private sector, to ensure we learn from each other and work together for a climate resilient future. Founded in 2018, the GCA is hosted by the Netherlands, working from its headquarters in Rotterdam with a knowledge and research hub based in Groningen. The GCA has a worldwide network of regional offices in Abidjan, Ivory Coast; Dhaka, Bangladesh and Beijing, China. Through this evolving network of offices and global and regional GCA teams, the organization engages in high-level policy activities, new research contributions, communications, and technical assistance to governments and the private sector. For more information please go to www.gca.org

About the Africa Adaptation Acceleration Program
As the global solutions broker on adaptation and resilience, the Global Center on Adaptation (GCA) has joined forces with the African Development Bank to create the Africa Adaptation Acceleration Program (AAAP) focusing on bringing four critical areas for adaptation action to scale in partnership with African countries and partners. The four critical areas of Climate Smart Digital Technologies for Agriculture and Food Security; African Infrastructure Resilience Accelerator; Empowering Youth for Entrepreneurship and Job Creation in Climate Adaptation and Resilience and Innovative Financial Initiatives for Africa will help address the nexus of climate change, COVID-19, and the economy and will support African countries in designing and implementing transformational adaptation of their economies and post-COVID recovery development paths. AAAP aims to mobilize $25 billion to support Africa’s adaptation plans over five years ($5 billion per year). The AfDB has already committed half of the total, $12.5 billion by 2025. The program has been endorsed by President Tshisekedi, Chair of the African Union and President Ali Bongo of Gabon, the African Union Champion for Adaptation.
For more information please go to www.gca.org/programs/africa-adaptation-acceleration-program/

About State and Trends in Adaptation in Africa Report 2021
The GCA’s 2021 State and Trends in Adaptation in Africa report presents the most comprehensive overview of the present and future prospects of the African continent in the light of climate change. It is also a blueprint for how individuals and institutions in the African and international policy space can design, finance, and implement adaptation plans to best protect the lives and livelihoods of hundreds of millions of African people. Published ahead of COP26 in Glasgow, the report is an evidence-based advocacy tool to put adaptation and resilience in Africa higher on the agenda nationally and internationally using the report’s actionable policy recommendations. As adaptation is scaled up in response to the challenge of climate change, the report is expected to influence the design of projects and programs, including those supported by the African Adaptation Acceleration Program.

To read the report please go to https://gca.org/reports/state-and-trends-in-adaptation-report-2021/ 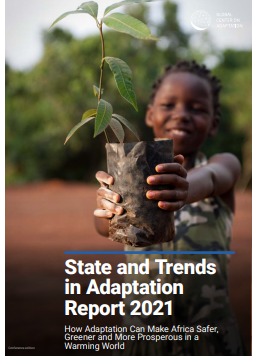