Global soil erosion projected to be worse than previously expected

What are the key findings for policy makers? Article 1 of the UN Convention to Combat Desertification (UNCCD), ratified in March 2020 by 197 countries, identifies soil erosion as a primary cause of land degradation, which, in turn, contributes to poverty and inequality through its negative effects on agriculture, food security, and ecosystems. Erosion caused by water flow wearing down soil surfaces could rise by up to two-thirds compared to today, according to a JRC-led study that modelled changes until 2070.

In a worst case scenario, with agricultural practices remaining the same as today and no additional policies implemented to limit global warming:

While previous regional studies using similar models already predict increasing loss of soil, they did not point to loss on the same scale as this study.

The Global South is estimated to bear the brunt of the erosion. Rich countries with high fertiliser use and moderate climates can expect erosion at a lower rate.

A host of knock-on effects

Their drive to provide food to all will be an even steeper uphill struggle.

The model used by the scientists involves remote sensing, interpolation techniques and statistical cross-checking. This is the first time it has been used to gain an estimate of future soil erosion at the global level.

Data on land use and climate change that will be used in next year’s report of the Intergovernmental Panel on Climate Change (IPCC) fed in to the model.

There is a lot that can be done. Planting trees next to agricultural land, the practice of crop rotation and building up the vegetative cover are all proven ways of keeping soil erosion in check.

But the policy should not have a narrow focus on fighting erosion alone. The increase in water erosion is mainly driven by the more vigorous water cycle triggered by climate change, suggesting that an all-encompassing approach is necessary.

What the EU is doing to protect soil ? find out more from the source (JRC; PNAS) The article is open access and included in our library collection. 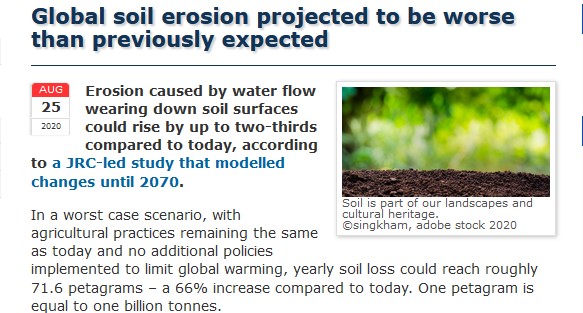