Greening the Belt and Road Projects in Central Asia. A Visual Synthesis

The official launch of the Belt and Road Initiative in 2013 ushered in a period of remarkable transformations in Central Asia. The development of new regional transit corridors linking north to south and east to west and the modernization of telecommunications networks are connecting the people in the region to each other and to the rest of the world. Chinese investments and technologies provide Central Asia countries with the opportunity to leapfrog some intermediate steps in the development of their infrastructure and economy, and to expand their global and regional trade and transportation networks.

For the five countries of Central Asia – Kazakhstan, Kyrgyzstan, Tajikistan, Turkmenistan and Uzbekistan – the Belt and Road Initiative and the associated Chinese investments are synonymous with a new era of political and economic relations.

The greening of the energy, transportation and agriculture sectors confers environmental benefits, and may give the countries a competitive advantage. China and its partners express their willingness to make Belt and Road developments mutually beneficial and greener. But how can these promises be fulfilled in Central Asia? Are the economic and political interests and the speed of the development under the Belt and Road initiative conducive to greening the investments?

This visual synthesis for the first time analyzes the developments, risks and opportunities of the Belt and Road in Central Asia in a concise format and richly illustrated by more than 30 maps, cartograms and infographics. The report was developed by Zoï Environment Network in cooperation with UNEP, Switzerland and partners in Central Asia and China.

About the Belt and Road initiative ;

China’s Belt and Road Initiative (BRI) (一带一路) is an ambitious programme to connect Asia with Africa and Europe via land and maritime networks along six corridors with the aim of improving regional integration, increasing trade and stimulating economic growth.

The name was coined in 2013 by China’s President Xi Jinping, who drew inspiration from the concept of the Silk Road established during the Han Dynasty 2,000 years ago – an ancient network of trade routes that connected China to the Mediterranean via Eurasia for centuries. The BRI has also been referred to in the past as 'One Belt One Road'.

Did you know that UNCCD has published with ZOI " Desertification: A visual synthesis" in six UN Languages 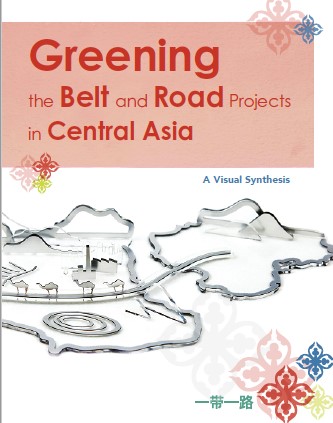