New USAID Report on the Double Burden of Climate Exposure and State Fragility - A ground-breaking report by the University of Texas  for USAID points out how climate hazards like  cyclones, floods, wildfires, rainfall anomalies and chronic water scarcity relate to state fragility. Climate hazards put an enormous strain on the effectiveness and legitimacy in economics, politics, security and the social sphere.

Compelling maps highlight hotspots for both the criteria (climate exposure and state fragility). The regions with the highest climate exposure and fragility risk levels. The areas with the highest levels of exposure and fragility risk are: Sub-Saharan Africa, the Middle-East and South-East Asia. The maps are particularly accurate and go beyond the traditional state-centric scale. They emphasise how different regions within a state have been affected by such factors, making it even more valuable, especially for large countries.

The study offers different angles to tackle the representation of climate exposure and state fragility. It emphasises how several million people are affected in India and Egypt for example, but also how in less populated countries a higher percentage of the population is affected (like in Cambodia and Mauritania). In absolute numbers India has more than 44 million people living in very high exposed areas (out of more than a billion Indian citizens). In the scarcely populated Cayman Islands 88% of citizens live in very high exposure areas.

read more and find out which places should be worried about. ; see deserts corresponding with chronic aridity

The Planetary Security Initiative is implemented by five institutes making up the PSI Consortium: 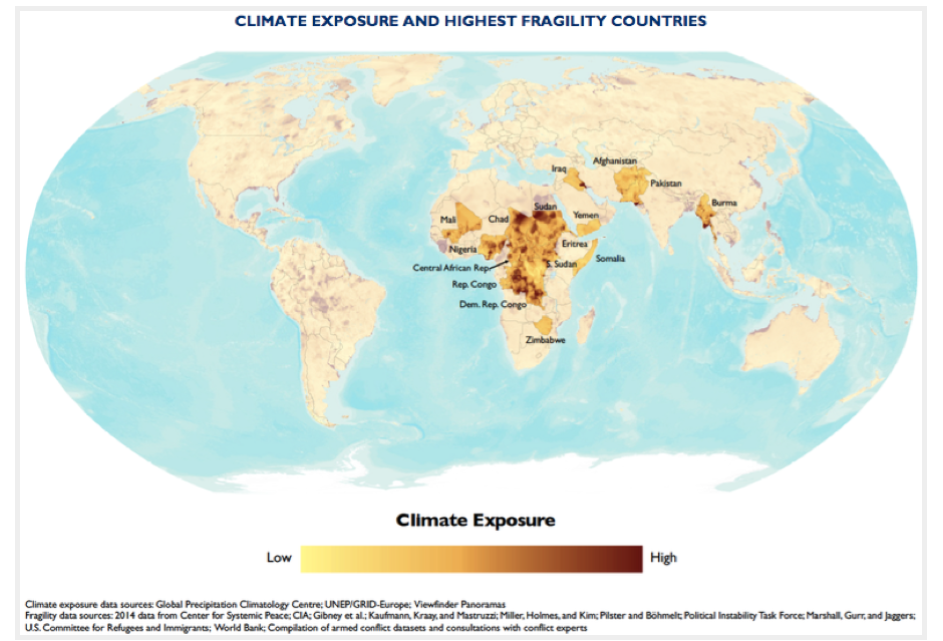