How does the amount of land that youth stand to inherit affect their migration and employment decisions?

The Effect of Land Access on Youth Employment and Migration Decisions: Evidence from Rural Ethiopia

How does the amount of land that youth expect to inherit affect their migration and employment decisions? The authors explore this question in the context of rural Ethiopia using a 2014 cross-sectional dataset indicating whether or not youth household members from a previous 2010 survey had migrated by 2014, and in which sector they worked in 2014.

We estimate a household fixed effects model and exploit exogenous variation in the timing of land redistributions to overcome endogenous household decisions about how much land to bequeath to descendants. We find that larger expected land inheritances significantly lower the likelihood of long-distance permanent migration and of permanent migration to urban areas. Inheriting more land also leads to a significantly higher likelihood of employment in agriculture and a lower likelihood of employment in the non-agricultural sector.

Conversely, the decision to attend school is unaffected. These results appear to be most heavily-driven by males and by the older half of our youth sample. We also find suggestive evidence that several mediating factors matter. Land inheritance is a much stronger predictor of rural-to-urban permanent migration and non-agricultural-sector employment in areas with less vibrant land markets, in relatively remote areas (those far from major urban centers), and in areas with lower soil quality. Overall, these results affirm the importance of push factors in dictating occupation and migration decisions in Ethiopia. 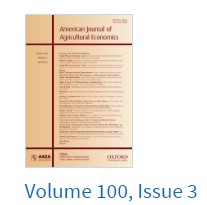