How to halt the global decline of lands

L and degradation is the persistent reduction in the capacity of the land to support human and other life on Earth. Human dominance of land and its natural resources has vastly increased over the past century and has substantially altered natural ecological processes on three-quarters of the Earth’s land surface. That domination of the biosphere has contributed to increased human welfare, but the downside to humans and the environment is increasingly apparent. In every terrestrial and freshwater ecosystem type, to varying degrees, unsustainable land use and overexploitation of natural resources have impaired ecological function, capacity to supply ecosystem services, and the ability to support biodiversity. Populations of wild species have decreased and extinctions are occurring much more frequently than the rate at which new species naturally evolve. Land degradation has negatively affected the living conditions of at least two-fifths of the people on Earth and it is estimated to be reducing global economic output by a tenth.

No easy political fix to land degradation The findings of the land degradation and restoration assessment — and equally alarming evidence presented by the Intergovernmental Science-Policy Platform on Biodiversity and Ecosystem Services (IPBES) Global Assessment  on land degradation and restoration and Intergovernmental Panel on Climate Change (IPCC) Special Report on Land, showing the interlinkages between land degradation, climate change and biodiversity loss — are not news to researchers or well-informed citizens. The IPBES assessment also provides evidence that land degradation is avoidable, and in many instances, reversible. Given that land degradation is typically local, visible and immediate, why has the issue failed to attract global attention in a similar way to climate change? Here are five systemic reasons, 10 strategies to overcome 5 systematic barriers in How to halt the global decline of lands... Published in Nature Sustainability, 10 February 2020

It is essential to recognize that land degradation is a widespread, yet fixable problem. Public and private sector decision makers, scientists and citizens all have a role to play in protecting and restoring land. Figure 1 shows the opportunities for strategic partnerships. Addressing the systemic barriers related to the measurement of land degradation is a feasible early step. There is a clear role for scientists in this regard. Other actions — particularly those related to changing people’s perception — will take more time. Together these actions can make the UN Decade for Ecological Restoration a turning point, rather than a talking point. Much depends on it. 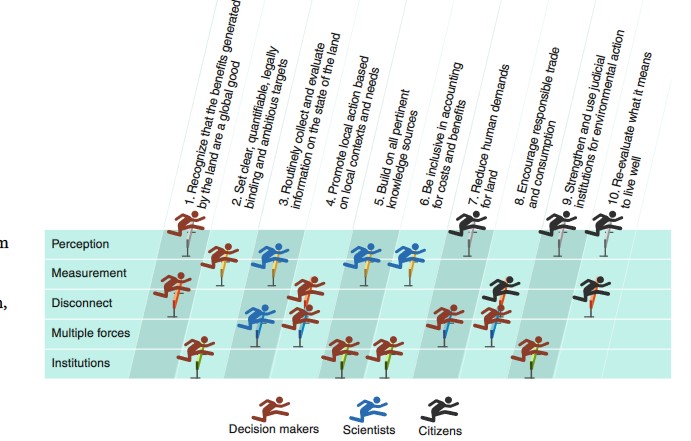