The IPCC’s Special Report on Climate Change and Land | What’s in it for Africa?

Desertification processes overall (which are caused by a combination of unsustainable land management and climate change) are driving losses in agricultural
productivity and incomes in drylands.  Local and national studies show how desertification is already causing farmers to suffer losses in income and wellbeing. In Ghana, land degradation decreased agricultural incomes by US$4.2 billion between 2006 – 2015, which increased the national poverty rate in 2015 by 5.4%.  Land degradation increased the probability of household poverty by 35% in Malawi and 48% in Tanzania.

About 821 million people globally were food insecure in 2017, of whom 31% are in Africa. Sub-Saharan Africa had the highest share of undernourished populations in the world in 2017, at 28%. In Eastern Africa, 31.4% of the population are undernourished.

Many dryland households and communities are already responding to land degradation in drylands (desertification). Some of these individual and community-level responses are detailed here. However, the big picture is that population pressure and climate change are already pushing people beyond their ‘resilience thresholds’ , requiring new technologies and policies to help people adapt successfully.

Future climate change – which will see more frequent and intense extreme weather events, such as droughts and heatwaves – is expected to worsen the vulnerability and risk of humans and ecosystems to desertification. Warming of more than 1.5 °C substantially increases the risk of aridity for Southern Africa.
Meanwhile, one study predicts that warming and increased moisture from the ocean will lead to increases in rainfall in the central Sahel – with more intense rainfall from the West African monsoon.

Some of the IPCC’s key messages, which are explored in the CDKN guide include:

The publication is not an official IPCC publication, as it has not been through the comprehensive governmental approval process that IPCC endorsement requires. However, the expert research team has benefited from review by IPCC lead authors in their personal capacities and other expert reviewers to ensure fidelity to the original report.

The CDKN publication also includes supplementary material from recently published research that extends and explains the points made in the IPCC’s Special Report. This guide responds to widespread demand among CDKN’s African partner networks for region-specific information. 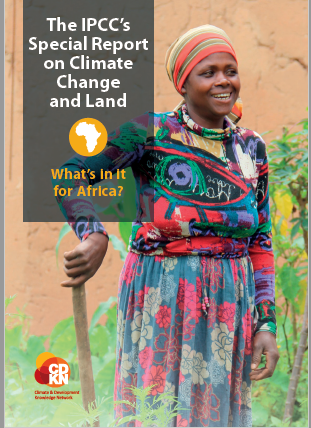