New WRI report highlights how countries can shift a portion of their existing agricultural subsidies – around $400 billion each year – to close the finance gap for farmland restoration, boost farmer incomes and food security, and protect nature. It also walks policymakers through a four-step process that they can take to do the tough work of reform, backed by concrete examples of past success in the Global South.

Every year, governments spend more than $700 billion on agricultural subsidies. But many of these policies fail to achieve their economic development goals, like boosting crop yields and creating jobs. Some even reward practices that harm grasslands and forests and erode the natural capital that is at the heart of farmer wealth.

Now it's time for governments to flip the switch and help people restore their land's lost vitality:

Government leaders that have done the hard work of policy reform will share their perspectives in advance of the UN Food Systems Summit. Then, a panel will highlight what shifts in the policy environment need to happen so that agriculture can become a major driver pf the UN Decade on Ecosystem Restoration (2021-2030).

More from the report:

Every year, governments give out $700 billion in agricultural subsidies globally. Though well-intentioned, these farm subsidies sometimes work against their core goal: boosting crop yields and farmer incomes while developing rural areas.

Farm subsidies can also inadvertently drive people to clear forests to produce commodities like soy and beef, which caused around 20% of global tree cover loss in 2018. This has a major economic toll, too.

Agriculture, forestry and land use change are also a major source of carbon pollution, representing 18.5% of climate-warming greenhouse gas emissions in 2016.

This year, governments specifically need to protect the food security of the 97 million people that the COVID-19 pandemic pushed into poverty in 2020. Achieving that outcome is only possible if they support the small farmers — working on less than two hectares each — that produce up to 34% of the world’s food supply..

Governments provide more than $1 million per minute in global farm subsidies, some of which incentivize farmers to clear forests to plant subsidized cash crops. Because farmers aim to maximize their profit (or eke out a living) and government support is a major source of their income, many farmers follow the money and convert biodiverse tropical forests — which store huge amounts of carbon — into sprawling single-crop farms.

Repurposing agricultural subsidies can help farmers follow the money in the opposite direction. Paying them to restore degraded farmland would help create sustainable value chains for forest products and lower the initial cost that landholders shoulder as they wait for the benefits of new trees to take root. This, combined with new mechanisms that compensate farmers for the environmental benefits of their land, can accelerate restoration and generate higher returns.

Agriculture and land use change account for up to a quarter of global greenhouse gas emissions and are a major cause of deforestation and ecosystem degradation. The misallocation of farm subsidies — which have risen globally from an annual $325 billion in 2000 to $619 billion today — is driving much of this destruction. Without reform, these subsidies will render vast expanses of healthy land useless. Given that the world will have 10 billion people by 2050, the loss of this land will make it impossible to feed the global population.

Shifting farm subsidies is also important because protecting, sustainably managing and restoring forests are the least expensive and most effective nature-based solutions that tropical countries can use to meet their nationally determined contributions (NDCs) to the Paris Climate Agreement.

This Report is part of the Global Restoration Initiative and the Food and Land Use Coalition within our Forests Program and Economics Center. Read further from WRI 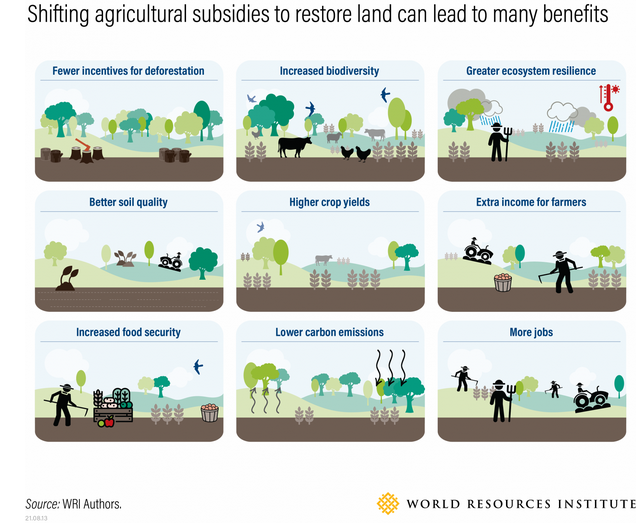