Land comprises a range of biophysical components such as soil, water, flora, and fauna, embedded in a landscape shaped by its geomorphology and subjected to a climate that is often under different forms of human manipulation.

The natural attributes of land are generated over long-time spans. Soil formation takes place over decades to centuries (Mason et al., 2016). The flora and microfauna suited to the soil in the prevailing climate conditions will evolve with the soil conditions while playing a soil-forming function.

Land degradation is a creeping phenomenon (Vlek etal., 2008) and is often recognized only when corrective action, i.e. a shift from trajectory B to trajectory A (Figure 1.1) has become prohibitive.The question of the degree of degradation depends on where the threshold of irreversibility is positioned (Figure 1.1). The resolve and economic strength of a community may increase the chances that a degraded piece of land will receive the investments needed to restore its functions.
The funding made available by Western governments for such restoration (e.g. by the EPA Superfund) are not readily available to developing or emerging economies. Moreover, the overall wealth of a community will determine to what extent farmers can follow curve A or are bound to follow curve B in using their land. 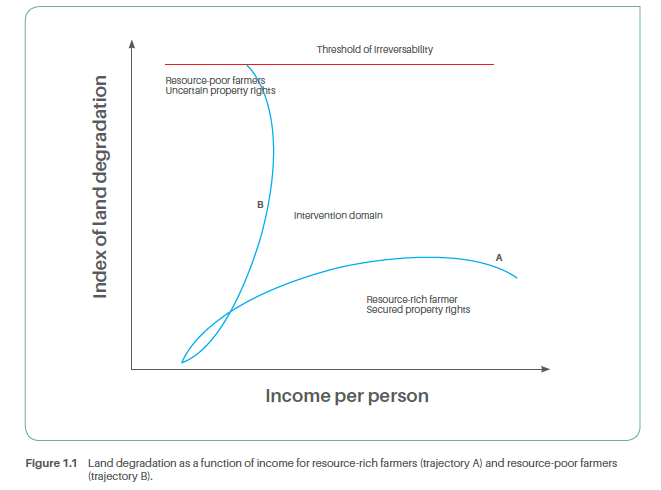 The assessment of the extent of land degradation is hampered by this lack of clear definitions and by the lack of long-term, land-based observation points, while alternative assessments from space are only at an early stage of development (Vlek et al., 2010). Details are discussed in Chapter 4. 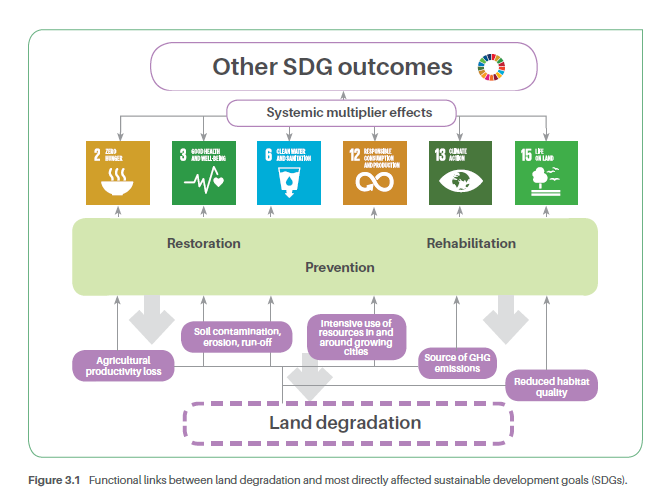 Mapping hotspots of land degradation
In a recent comparative review, global LD assessments estimates of total degraded area varied from less than 1 billion ha to over 6 billion ha, with equally wide disagreement in their spatial distribution (Gibbs and Salmon, 2015).

This large divergence can be related to a wide spectrum of methodologies in terms of data sources and data versions, types of indicators, temporal and spatial aggregation of data, calculation metrics and ways of treating confounding factors (Le, 2012).

This results in a high degree of uncertainty in the LD maps, making it difficult to target remedial action of degraded areas. The hotspot mapping approach is a way of dealing with the current poor convergence in global LD assessments. The aim of hotspot mapping is different from efforts that aim to map all degraded areas accurately. It aims to delineate only the degraded areas where there is high confidence in the results using the current methods and data and focuses on areas where LD is affecting large numbers of people.

Strategies to meet land degradation neutrality
The interpretation and operationalization of LDN is still in its early stages. The idea of a “land degradation neutral world” (UNCCD, 2012) was first introduced to the international environmental arena at the Rio+20 conference. Several scholars and organizations have since discussed possible interpretations and implications of this topic (e.g. Welton et al., 2014; Altvater et al., 2015; Chasek et al., 2015; IUCN, 2015; Tal, 2015; Akhtar-Schuster et al., in press).

The interpretation of neutrality in the context of LD is challenging and will require further elaboration to provide guidance for its implementation. An essential step in this direction was the establishment of a definition of LDN by an Intergovernmental Working Group (IWG) under the UNCCD.

The IWG defined LDN as “a state whereby the amount and quality of land resources necessary to support ecosystem functions and services and enhance food security remain stable or increase within specified temporal and spatial scales and ecosystems.” (UNCCD 2015, dec.3/COP.12). Based on this definition, the Science-Policy Interface (SPI) of the UNCCD was requested to develop a scientific conceptual framework for LDN that aims to provide guidance for implementing LDN at the country level (UNCCD, 2016a, b).

Starting with the vision of what LDN is expected to achieve, the conceptual framework focus is “on maintaining or enhancing the land resource base, (the stocks of natural capital associated with land resources), in order to sustain the ecosystem services that flow from them, including food production and other livelihood benefits” (UNCCD, 2016b). The year 2015 was accepted as the baseline year. Following the neutrality logic, the target state should be equivalent to the baseline.

To translate the LDN target into strategies for implementation, the so-called LDN response hierarchy plays a central role and is proposed as a guiding principle for land-use planning. Following the recognition that ‘prevention is better than cure’, the response hierarchy prioritizes avoiding degradation, followed by reducing ongoing degradation. Once the possibilities for avoiding and/or reducing LD have been sufficiently used, reversing land degradation through restoration and rehabilitation or reclamation of already degraded land should be an option to counterbalance the remaining part of what might be termed ‘unavoidable degradation’.

The concern for the well-being of land is often directly related to one’s proximity to the land, be it physical, economic or cultural. Land is more precious if one’s livelihood depend on it immediately than if one is merely a visitor. Land is valued differently if it is the base of one’s power or wealth than if one’s community needs its integrity and depends on the ESSs that it provides.

To some extent, this may explain the great challenge UNCCD has experienced in mustering international support for its mandate. The degradation of land has long been a local concern, and in contrast with climate change and water pollution, not one that would affect populations beyond the location where the problem originated. The arrival of environmental migrants far from the affected regions is contributing to a change of vision and increased urgency to counter land degradation. (CGIAR)