More countries are rightly recognising nature as a climate hero, as there is no pathway to limit global warming to 1.5°C without protecting and restoring nature.

A new report from WWF has found that countries are increasingly recognising the value of nature-based solutions (NbS) in their efforts to address the climate crisis. Some 92 percent of the updated climate pledges (Nationally Determined Contributions or NDCs) assessed in the study include nature-based solutions which harness the power of nature to reduce emissions and adapt to climate impacts.

Under the Paris Agreement on climate change, countries are expected to submit enhanced NDCs to the UN every five years. This fourth edition of NDCs - A Force for Nature? compared inclusion of nature-based solutions in the latest round of NDCs to previous pledges. As of 12th October 2021 (report cut-off date) 140 parties to the UNFCCC (including the EU – 27 member states) had submitted 114 updated or revised NDCs.

Parties to the Paris Agreement assessed in this report include major emitters and G20 nations including Australia, Argentina, the European Union, Japan, The Republic of Korea, Russia, the United Kingdom and the United States.

Parties with an updated NDC assessed in this report represent 42% of global emissions and it is worth noting that there is still a big gap, both in big emitters stepping forward with targets, and in closing the gap to pursuing efforts of keeping warming to 1.5 C as the latest UNFCCC NDC Synthesis Report recently found. 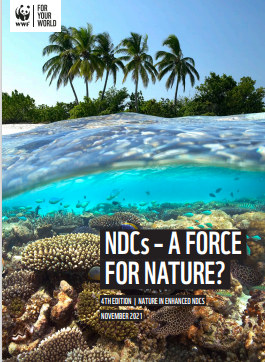