This evaluation assesses how well the World Bank has addressed natural resource degradation to reduce the vulnerabilities of resource-dependent people.

Renewable natural resources are becoming increasingly degraded, that is, declining in their productive capacity to sustain uses necessary for human well-being and inclusive growth.

Many of the world’s poor people are resource dependent, that is, directly reliant on natural resources for their well-being. 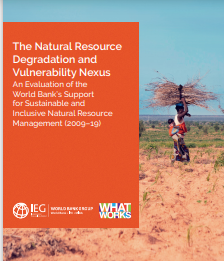