Nature is An Economic Winner for COVID-19 Recovery

This is not “pie in the sky,” as you might think. It is exactly what the European Commission has proposed as the basis for a €750 billion “European Green Deal.” The package would include major investments in protecting and restoring forests, soils, wetlands, and rivers as well as transforming agricultural practices to make them more sustainable. Europe's “Green Deal” is far from a done deal; a political process is just beginning during which vested interests will undoubtedly push to water it down. But it is an example of the kind of longer-term, visionary thinking that is critically needed at this moment. As countries look to build back better after the coronavirus pandemic, investments in protecting and restoring nature can deliver significant economic returns and employment benefits at a time when both are urgently needed.

The COVID-19 pandemic has already had significant negative impacts on economic well-being around the world. Alongside the grim toll of lives lost and upended by the pandemic, unemployment has spiked, economic growth forecasts have been revised downward, and supply chains have been disrupted. The pandemic has led to a major crisis for the global economy and for individual countries struggling to sustain growth or continue progress on their development trajectories.

As countries focus on addressing the wrenching effects of the coronavirus pandemic, other global priorities remain critically important. We are still on track for at least 2o Celsius of global warming, and the various effects of climate change are already with us — from rising temperatures to more frequent and intense storms and droughts. More than one million species are threatened with extinction. Emerging evidence links the transmission of zoonotic diseases, like COVID-19, to deforestation and land degradation.

Countries are responding to the economic impacts of COVID-19 by allocating trillions of dollars to fiscal stimulus packages and beginning to develop longer-term economic recovery programs. According to the International Monetary Fund, about US$9 trillion in fiscal support had been announced as of May 2020. The United States has agreed to a series of economic stimulus packages worth more than $3 trillion; Japan has committed more than $2 trillion. Yet preliminary analysis shows that few of these stimulus responses can be described as “green.” Indeed, many initial responses are more likely to contribute to further environmental and climate problems (see figure below).

Almost a quarter of the world’s land area has been degraded over the past 50 years, costing the world an estimated $6.3 trillion a year (8.3 percent of global GDP in 2016) in ecosystem service value. Restoration activities, from “rewilding” ecosystems to regenerating farmland, offer a diverse array of economic prospects. For example, they generate an estimated $7 to $30 in benefits for every dollar invested. Below are five key action areas for COVID-19 stimulus efforts where restoration activities can deliver economic and many other benefits. 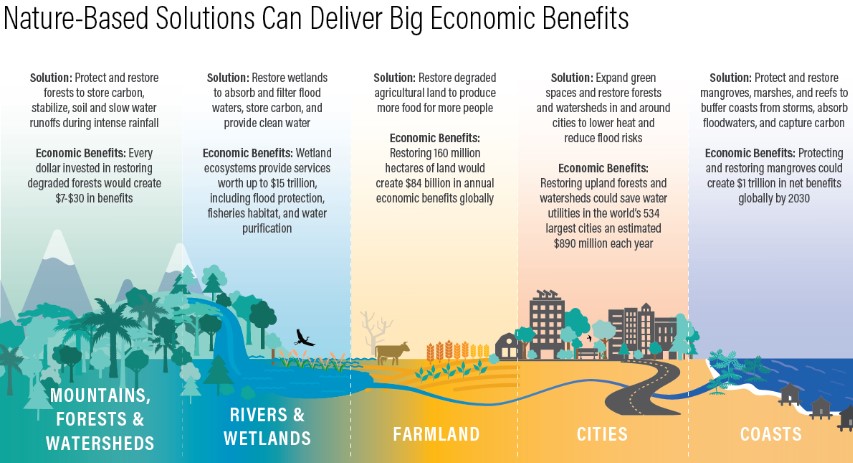