Reported potentials for sequestration of carbon in soils of agricultural lands are overly optimistic because they assume that all degraded cropland and grassland can be subjected to best management practices. Two approaches for estimating this potential are presented.

The objective of this study is to discuss the biophysical potential versus technologically achievable limits for increased C sequestration in the world's ‘degraded’ croplands and grasslands, using two different empirical approaches. In the first approach, hereafter referred to as Method 1 (M1), possible annual gains in SOC in the topsoil (defined here as 0–30 cm in accordance with IPCC, 2006 guidelines), considered most affected by land management practices are calculated using literature‐derived data for C sequestration rates (Mg C ha−1 yr−1) for defined agroclimatic regions and land use types

Alternatively, the second approach (abbreviated here as M2) uses assumptions similar to those adopted for the “4 pour mille initiative” (Soussana et al., 2015); possible increases in SOC mass are calculated with respect to “best estimates” for present SOC reserves (0–30 cm) at a given location. Further, for M1 and M2, plausible limits (scenarios) are introduced for the extent of land, where the recommended practices may be applied (e.g., 10% or 30%), giving figures for achievable versus potential technological C gains.

According to the present assumptions, at most 10% of annual CO2 emissions (average for 2006–2015) from fossil fuels and industry could be sequestered if degraded croplands and grasslands were to be subjected to widespread (100%) implementation of BMPs. In practice, the achievable potential will be much lower than this. For these achievable levels to become feasible, adequate socio‐economic incentives and policy interventions will be required. 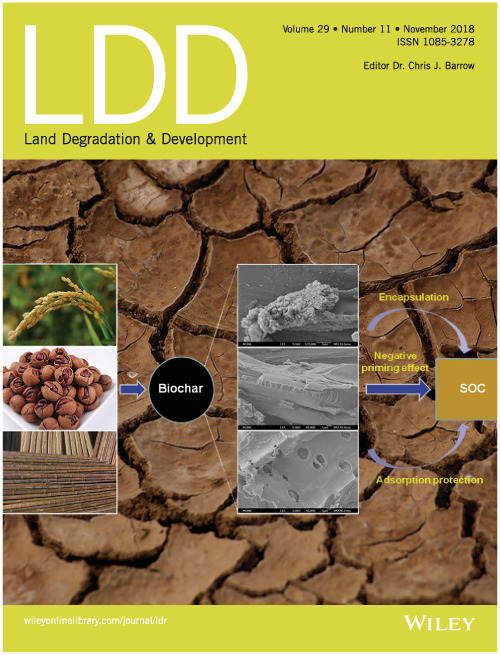