On top of a decade of exacerbated disaster loss, exceptional global heat, retreating ice and rising sea levels, humanity and our food security face a range of new and unprecedented hazards, such as megafires, extreme weather events, desert locust swarms of magnitudes previously unseen, and the COVID-19 pandemic.

Agriculture underpins the livelihoods of over 2.5 billion people – most of them in low-income developing countries – and remains a key driver of development. At no other point in history has agriculture been faced with such an array of familiar and unfamiliar risks, interacting in a hyperconnected world and a precipitously changing landscape. And agriculture continues to absorb a disproportionate share of the damage and loss wrought by disasters. Their growing frequency and intensity, along with the systemic nature of risk, are upending people’s lives, devastating livelihoods, and jeopardizing our entire food system. This report makes a powerful case for investing in resilience and disaster risk reduction – especially data gathering and analysis for evidence informed action – to ensure agriculture’s crucial role in achieving the future we want.

Agriculture absorbs the bulk of the financial losses and damages wrought by disasters which have grown in frequency, intensity, and complexity, says FAO in a new report  The Impact of disasters and crises on agriculture and food security: 2021 released today.

At no other point in history have agri-food systems confronted with such an array of new and unprecedented threats, including megafires, extreme weather, unusually large desert locust swarms, and emerging biological threats like the COVID-19 pandemic. These hazards not only take lives but also devastate agricultural livelihoods and inflict cascading negative economic consequences at the household, community, national and regional levels that can endure for generations, the report says.

According to the report, annual occurrence of disasters is now more than three times that of the 1970s and 1980s. Relative to agriculture, industry, commerce and tourism taken as a whole, on its own agriculture absorbs the disproportionate share of 63 percent of impact from disasters, with the least developed countries (LDCs) and low- and middle-income countries (LMICs) bearing the major brunt of these scourges.

"The upheaval set in motion by COVID-19 may push even more families and communities into deeper distress," said FAO Director-General QU Dongyu in the foreword to the report. "Disaster impact is pervasive and requires immediate efforts to better assess and understand its dynamics, so that it may be reduced and managed in integrated and innovative ways. The urgency and importance of doing so have never been greater".

The report identifies drought as the single greatest culprit of agricultural production loss, followed by floods, storms, pests and diseases, and wildfires.

Crop and livestock pests, diseases and infestations have also become an important stressor for the sector. Such biological disasters caused nine percent of all crop and livestock production loss in the period from 2008 to 2018. The potential threat of disasters of this category was rendered evident in 2020 when huge swarms of desert locusts ravaged across the Greater Horn of Africa, the Arabian Peninsula, and Southwest Asia destroying crops and jeopardising food security.

Disasters extend beyond the economic realm having deleterious consequences for food security and nutrition. For the first time ever, this edition of the FAO report converts economic losses into caloric and nutrition equivalents.

A disaster resilient future is possible

Holistic responses and cross-sectoral collaboration are key in the disaster response. Countries must adopt a multi-hazard and multi- sectoral systemic risk management approach to anticipate, prevent, prepare for and respond to disaster risk in agriculture. Strategies need to integrate not only natural hazards but also anthropogenic and biological threats, such as the COVID-19 pandemic, and must be based on an understanding of the systemic nature and interdependencies of risks.

Innovations such as remote sensing, geospatial information gathering, drones and disaster robotics, and machine learning are powerful new assessment and data gathering tools that have much to offer in the quest to reduce disaster risks in agriculture.

In addition to efficient governance, it is crucial to promote public-private partnerships to address the urgent need for investment in reducing agriculture's susceptibility to disasters and climate change.

FAO's recurring report The Impact of Disasters and Crises on Agriculture and Food Security presents the most recent trends in agricultural production loss attributed to disasters across all agricultural sectors. The 2021 edition covers 457 disasters in 109 countries across all regions and income categories, including for the first time upper-middle- and high-income countries (UMICs and HICs).

Agriculture is facing an array of both familiar and unfamiliar risks, interacting in a hyperconnected world and a precipitously changing landscape. Disaster risk is becoming increasingly compound, interconnected and interacting, causing shifts in the frequency and intensity of hazards. This is not without the ﬁngerprint of climate change, which is materializing into decade-old predictions much sooner than envisaged. This report constitutes a further step towards bridging persistent knowledge gaps and fostering a better understanding of how agriculture is affected by disasters.

Extreme events such as drought, ﬂoods, storms, tsunamis, wildﬁres, pest and disease outbreaks exert a heavy toll on agriculture and all its sectors: crops, livestock, forestry, ﬁsheries and aquaculture. Their growing frequency and intensity, along with the systemic nature of risk, are jeopardizing our agri-food systems. Least developed countries and lower-income countries are often among the most affected, with cascading consequences for value chains, food security and even national economies. Increased risk exposure has become the ‘new normal’ and the impact of climate change is set to exacerbate these challenges even further.

Drought has previously been established within this report series as  the single greatest culprit of agricultural production loss (FAO, The  Impact of disasters and crises on agriculture and food security, 2017). It still is.  Over 34 percent of crop and livestock production loss in LDCs and  LMICs is traced to the occurrence of drought, costing the sector  USD 37 billion overall.

Moreover, as highlighted in the Introduction of  this edition, drought impacts agriculture almost exclusively; it sustains  82 percent of all drought impact, compared to 18 percent in all other sectors.  Agricultural drought risk assessment, therefore, lies at the core of overall  drought risk management and is the prerequisite for the development of  sustainable drought mitigation measures. 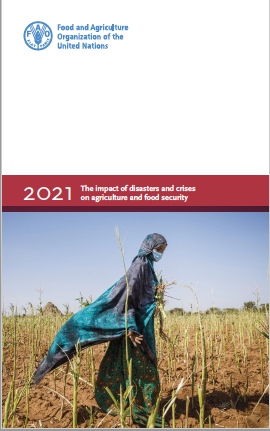