Water is at the heart of the 2030 Agenda for Sustainable Development. Securing water for people, productivity and the environment is a necessary condition for sustainable growth, ending poverty and hunger, and fully achieving the SDGs. Despite progress, billions of people still lack access to safe water, sanitation and hand-washing facilities.

Today, many countries are at risk of running out of water, especially in the Arab region – the most water scarce region in the world – with water availability now cited as one of the greatest risks to business continuity and growth. UN-Water warns that progress on clean water and sanitation (SDG 6) remains uneven and that we are not on track to reach the 2030 Agenda. Failing to achieve water security will jeopardize the whole of the SDGs.

Diminishing Water Resources: A Risk to Growth and Security

The Arab region is considered one of the world’s poorest regions in terms of water availability and globally, is most likely to suffer from water crises. Over the next 20 years, freshwater per resources per capita are estimated to keep declining steadily unless a fundamental shift occurs.

To achieve the water SDG, a paradigm shift in the Arab region means....

The world runs on water. Clean, reliable water supplies are vital for industry, agriculture, and energy production. Every community and ecosystem on Earth depends on water for sanitation, hygiene, and daily survival.

Yet the world’s water systems face formidable threats. More than a billion people currently live in water-scarce regions, and as many as 3.5 billion could experience water scarcity by 2025. Increasing pollution degrades freshwater and coastal aquatic ecosystems. And climate change is poised to shift precipitation patterns and speed glacial melt, altering water supplies and intensifying floods and drought.

Within three decades, almost 80% of the lands that depend on groundwater will start to reach their natural irrigation limits as the wells run dry.In a world of increasing extremes of drought and rainfall, driven by rising global temperatures and potentially catastrophic climate change, the water will start to run out.

It is happening already: in 20% of those water catchments in which farmers and cities rely on pumped groundwater, the flow of streams and rivers has fallen and the surface flow has dwindled, changed direction or stopped altogether.

“The effects can be seen already in the Midwest of the United States and in the Indus Valley project between Afghanistan and Pakistan,” said Inge de Graaf, a hydrologist at the University of Freiburg. 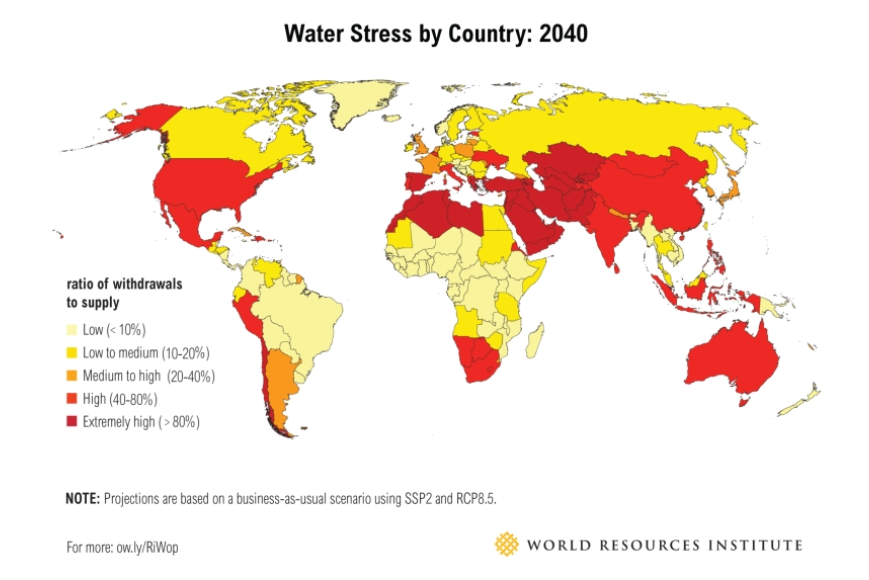