Climate change and extreme weather are threatening human health and safety, food, water and energy security and the environment in Latin America and the Caribbean.

The impacts span the entire region, including Andean peaks, mighty river basins and low-lying islands, according to a new report from the World Meteorological Organization (WMO). It flags concerns about fires and the loss of forests which are a vital carbon sink.

The "State of the Climate in Latin America and the Caribbean 2020" provides a snapshot of the effects of increasing temperatures, changing precipitation patterns, storms and retreating glaciers.

It follows the release of the Intergovernmental Panel on Climate Change report on Climate Change 2021: the Physical Science basis, which said that temperatures in the region have increased more than the global average and are likely to continue to do so. It also projected changing precipitation patterns, more sea level rise, coastal flooding and marine heatwaves.

“Latin America and the Caribbean (LAC) is among the regions most challenged by extreme hydro- meteorological events. This was highlighted in 2020 by the death and devastation from Hurricane Eta and Iota in Guatemala, Honduras, Nicaragua and Costa Rica, and the intense drought and unusual fire season in the Pantanal region of Brazil, Bolivia, Paraguay, and Argentina. Notable impacts included water and energy-related shortages, agricultural losses, displacement and compromised health and safety, all compounding challenges from the COVID-19 pandemic,” said WMO Secretary-General Prof. Petteri Taalas.

Fires and deforestation are now threatening one of the world’s largest carbon sinks, with far-reaching and long-lasting repercussions,” he said.

“As the report makes clear, climate change is impacting livelihoods in the LAC region and increasing disaster risk. The comprehensive climate and risk management approach, promoted by UNDRR, supports governments and communities in reducing, averting and minimizing both current and future climate risks. Accurate and accessible information is crucial for risk-informed decision-making, and the “State of the Climate in Latin America and the Caribbean” is a vital tool in our battle for a safer, more resilient world,” said Ms Mami Mizutori, Special Representative of the Secretary-General for Disaster Risk Reduction and Head of UNDRR.

Check out  the interactive story map here State of the Climate in Latin America & the Caribbean 2020 (arcgis.com)

Fires and loss of ecosystems

2020 surpassed 2019 to become the most active fire year in the southern Amazon, with drought being a major contributory factor. The year 2020 was the most catastrophic fire season over Pantanal, burned area exceeded 26% of the region, according to the ALARMES warning system  from the Laboratory for Environmental Satellite Applications (LASA-UFRJ). This amount was four times larger than the long-term average observed between 2001 and 2019.

While it is still a net carbon sink, the Amazon teeters on the edge of becoming a net source if forest loss continues at current rates. This was highlighted in a recent study.

The report’s findings are based on a standard methodology for assessing the physical aspects of the climate system drawing on data from 1700 meteorological stations in Mexico, Central America and Caribbean and from gridded data for South America. These data were compiled through a joint effort among WMO RCCs and NMHSs.  Anomalies and percentages were derived for air temperature and rainfall data relative to the 1981-2010 reference period. National and international institutions provided additional information and data.

WMO thanks all contributors, including the Economic Commission for Latin America and the Caribbean, the Food and Agriculture Organization, the UN Office for Disaster Risk Reduction and the UN Environment Programme for their input. 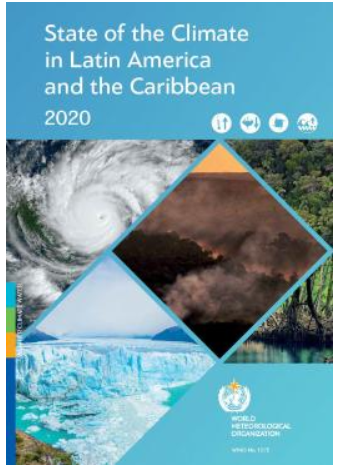