A study led by researchers at the International Institute for Applied Systems Analysis (IIASA) finds that the impact of climatic conditions on drought severity and the likelihood of armed conflict played a significant role as an explanatory factor for asylum seeking in 2011-2015. The authors analysed bilateral data on asylum seeking applications for 157 countries over the 2006-2015 period using a gravity model to examine the causal link between climate, conflict and forced migration.

According to the study titled, ‘Climate, Conflict and Forced Migration,’ the effect of climate on conflict occurrence is of particular relevance for Western Asia in the period 2010-2012 when many countries were undergoing political transformation, which suggests that “the impact of climate on conflict and asylum seeking flows is limited to specific time period and contexts.”

The authors identify five categories of drivers of migration that are addressed in existing frameworks:

While the researchers recognize that there is no empirical evidence backing the existence of a robust link between climatic shocks, conflict and asylum seeking for the full period 2006-2015, their model supports these causal linkages for the period 2010-2012, where “global refugee flow dynamics were dominated by asylum seekers originating from Syria and countries affected by the Arab spring, as well as flows related to war episodes in Sub-Saharan Africa.”

The authors further note that excluding these regions from the analysis provides further statistical evidence, that the link between climate shocks, conflict and subsequent migration flows might be interpreted as a local phenomenon specific to these regions. They acknowledge that further studies based on more data from specific areas and time periods are needed in order to draw more definitive conclusions on the links between climate shocks, conflict, and migration flows.The study was published in Elsevier Journal on Global Environmental Change. ( IIASA) 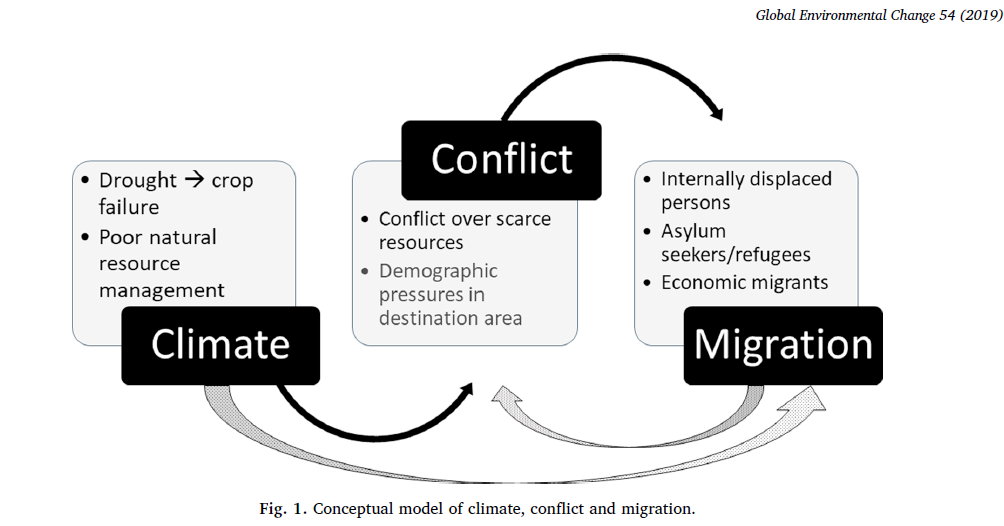