Statistics on global water challenges are daunting: 3 billion people don’t have basic handwashing facilities. A quarter of the world’s population live in countries facing extremely high water stress. There are more than 500 dead zones — areas of the ocean without enough oxygen for most marine life to survive — from untreated wastewater.

The solutions to world’s water crises, though, cost far less than you might think. New WRI research  Achieving Abundance: Understanding the Cost of a Sustainable Water Future Data found that securing water for our societies by 2030 could cost just over 1% of global GDP —about 29 cents per person, per day from 2015-2030.

And the economic benefits outweigh the costs. Every dollar invested in water access and sanitation yields an average $6.80 in returns. The World Bank found that failing to implement better water management policies could result in regional GDP losses from 2-10% by 2050.

Countries, states and governments around the world should pay attention to, and invest in, water security outside their own boundaries. Water crises cascade beyond national borders: Droughts and water stress can contribute to violent conflict, migration and regional instability. In Mali, violence is already erupting between farmers and pastoralists over increasingly scarce water and land resources. Water shortages can hurt agriculture, raising the prices of staple crops around the world. This can cause poor nutrition, hurt the global economy and further contribute to conflict. For example, droughts in 2010 in Russia, Ukraine, China and Argentina caused spikes in wheat prices, which experts say was one of many driving forces of the Arab Spring. 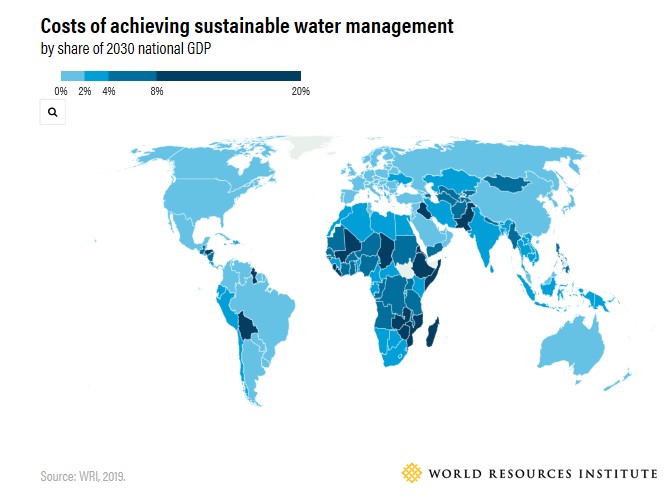