The Oxford Handbook of the African Sahel

Long on the margins of both scholarly and policy concerns, the countries of the West African Sahel have recently attracted world attention, primarily as a key battleground in the global 'war on terror'. This book moves beyond this narrow focus, providing a multidimensional and interdisciplinary assessment of the region in all of its complexity. The focus is on the six countries at the heart of the Sahelian geographic space: Senegal, Mauritania, Mali, Burkina Faso, Niger, and Chad. Collectively, the chapters explore the commonalities and interconnections that link these countries and their fates, while also underscoring their diversity and the variations in their current realities.

The Sahel today is at an important crossroads, under multiple pressures of diverse kinds: environmental, political, demographic, and economic, as well as rapidly changing social and religious dynamics. It is also marked by striking dynamism and experimentation, drawing on a long history of innovation and cultural transfer. In many ways the Sahel is today on the cutting edge of grand natural experiments exploring how humans will adapt to climate change, to technological innovation, to the global movement of populations and the restructuring of world politics, to urbanization, social change, and rapid demographic growth, and to inter-religious contact. The region is a weathervane on the front lines of the forces of global change.

In nine thematic sections, the chapters in this book offer holistic analyses of the key forces shaping the region. Including scholars based in Africa, Europe, and the United States, the authors represent an exceptional breadth and depth of expertise on the Sahel.

Editor's Introduction
Framing the Sahel: Spaces, Challenges, Encounters, Leonardo A. Villalón
Section I: The Sahel as Region
1. Mapping the Sahelian Space, Olivier Walther and Denis Retaillé
2. French Colonialism and the Making of the Modern Sahel, Gregory Mann
3. The Construction of States and Societies in the Sahel, Jean-Pierre Olivier de Sardan
4. Civil Society and Political Order in the Sahel, Augustin Loada ,

Section III: The Environment and the Challenge of Climate Change
Section Editor's Introduction, Sarah McKune
11. Land Use Change and Climate-Smart Agriculture in the Sahel, Suzanne Cotillon, Gray Tappen, and Chris Reij
12. The Challenge of Food and Nutritional Security, Sarah McKune
13. Demography and Health in the Context of Climate Change, Alisha Graves, Nouhou Abdoul Moumouni, and Malcom Potts
14. Climate Change and Human Conflict in the Sahel, Tor A. Benjaminsen
15. Drivers of Growth and Decline in Sahelian Livestock Sectors, Marjatta Eilittä

ABOUT the author: Leonardo A. Villalón, Dean of the International Center and Professor of Political Science and African Studies, University of Florida

Leonardo A. Villalón is Dean of the International Center and Professor of Political Science and African Studies at the University of Florida, where he also coordinates the Sahel Research Group. He is a specialist on the countries of the African Sahel (Senegal, Mali, Niger, Burkina Faso, Mauritania, and Chad), in particular the role of Islam in democratization, education, and political stability. He has published numerous works on the region. He is past president of the West African Research Association, and currently chair of the board of directors of the Council of American Overseas Research Centers (CAORC). 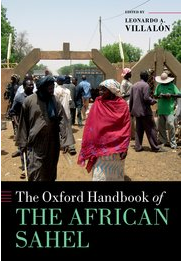