Putting People at the Center of Climate Action - WRI

In December 2015 world leaders held hands on a stage in Paris, united in their commitment to limit global temperature rise to below 2oC (3.6°F) and ideally to 1.5oC (2.7°F).  The Paris Agreement remains the world’s best shot at avoiding runaway climate change. Implemented wisely, it can also unlock the inclusive growth story of the 21st century, improving lives around the world.

More frequent and severe wildfires, storms, and record heatwaves are devastating communities. In the first half of 2019 such events displaced a record 7 million people. Climate change is disrupting lives and livelihoods, with the poorest hit hardest. New studies show that even half a degree of warming can lead to millions more people being impacted and much greater economic damage. Inaction, or inadequate action, will mean more lives lost, mass migration, major economic disruptions and worsening inequality.

Improving agricultural practices and land use is a critical aspect of the interrelated challenges of feeding the world, ensuring sustainable rural livelihoods, and addressing climate change. 820 million people are malnourished and regularly go hungry. More than two-thirds of the global poor (more than 500 million people) live in rural areas, where they often experience inequitable access to land and resources, and poor access to markets — which can lead to heavy losses of produce before it’s even sold.

By 2050, the world will need to feed nearly 10 billion people. The difference between the amount of food produced in 2010 and the amount needed to feed nearly 10 billion people is estimated at 7,400 trillion calories. That’s a 56% increase from what we produced in in 2010. But we simply cannot use 56% more land. Instead, we must sustainably increase productivity on current agricultural land to avoid further expansion into natural areas.

A recent report from the Food and Land Use Coalition suggests that key improvements in food and land use systems could indeed improve global food security, while at the same time leading to doubled rural income growth and over 120 million new jobs in poor rural communities. Total economic gains from transforming food and land-use systems could reach $5.7 trillion a year by 2030, linked to reduced greenhouse gas emissions, preservation of natural capital, improved human health, and gains in agricultural productivity and food distribution systems.

Recent analysis by the Global Commission on Adaptation indicates that an investment of $1.8 trillion between 2020 and 2030 could yield benefits of $7.1 trillion over this period. These benefits include avoided losses to farmers’ livelihoods, to workers’ jobs and wages; avoided damage to homes, businesses and infrastructure; and avoided deaths, trauma and illness.

Climate adaptation can especially benefit the poor, who tend to live in areas more exposed to natural hazards like landslides or flooding. The social gains of adaptation will be greater and more equitable if poor and vulnerable populations participate in the planning and design of public policies, contributing unique local knowledge and voicing their specific needs.

Read further from the source WRI 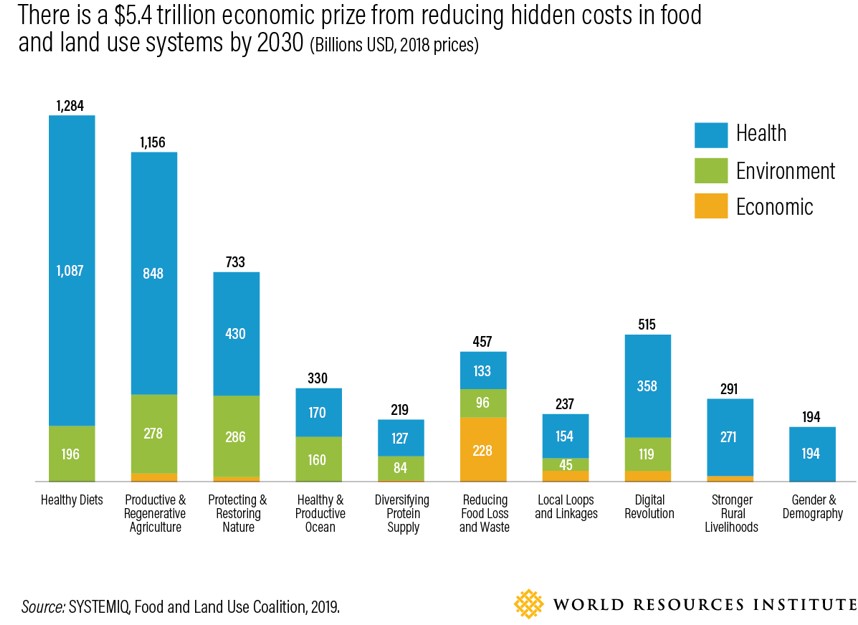