Today, the Coalition for Urban Transitions releases a new report ‘Seizing the Urban Opportunity’, which provides insights from six emerging economies on how national governments can recover from COVID-19, tackle the climate crisis and secure shared prosperity through cities. Launching as a call to action for national governments ahead of COP26 in Glasgow, it builds on the Coalition’s flagship 2019 report: Climate Emergency, Urban Opportunity.

National governments can spur COVID-19 recovery, achieve shared prosperity and drive climate action through national policies and targeted investments to decarbonise cities and make them more resilient. This report shows the power of urban transformation and the many ways to achieve it by looking up close at six major emerging economies: China, India, Indonesia, Brazil, Mexico and South Africa.

Cities are vital to solving the triple challenges of COVID-19 recovery, sustainable and inclusive development, and climate change; but they need national leadership and support to realise their potential.

This new report builds on previous research from our 2019 flagship report, Climate Emergency, Urban Opportunity, which found that national governments hold the key to urban transformations as they drive or control key policy realms and are responsible for mobilising resources at the scale needed.

This is a pivotal time for national governments, as the choices they make amid the COVID crisis can put their countries on track for a more prosperous and resilient future, or accelerate the climate emergency.

By 2030, investment in urban infrastructure must be directed towards zero-carbon, resilient, and inclusive development if cities are to reach their potential for delivering the emission reductions needed for a well below 2°C climate scenario. This report seeks to build momentum for enhanced climate ambition by national governments and other actors ahead of COP26 in Glasgow.

Recognising that developing and emerging economies face particularly complex challenges exacerbated by the pandemic, the report focuses on six key countries: China, India, Indonesia, Brazil, Mexico, and South Africa. Together, they produce about a third of global GDP and 41% of CO2 emissions from fossil fuel use.

They are also home to 42% of the world’s urban population. The extent to these six major emerging economies can unleash the power of cities to catalyse sustainable, inclusive and resilient growth is therefore critical not only for their future trajectory, but for the whole planet.

The report finds that these solutions could collectively support significant economic and development benefits, and cut annual emissions from key urban sectors by 87–96% by 2050 beyond their initial NDC commitments under the Paris Agreement.

The report is a collaborative effort, created in consultation with experts and policymakers in the six focus countries, with additional input from more than 36 organisations across five continents.

This report is as critical as it is timely. By 2030 nearly a billion people will be added to the global urban population—and trillions of dollars will be invested in urban infrastructure—in the decade where global CO2 emissions must be reduced by around half for the target of holding temperature increase to 1.5 degrees C,” said Professor Lord Nicholas Stern, Chair of the Grantham Research Institute on Climate Change and the Environment at the London School of Economics. “Focusing on compact, connected, and clean cities—where it is easier to move, breathe and work productively and greenhouse gas emissions can be far lower than in existing urban structures—will be at the heart of achieving climate ambitions and finding a new path to strong, sustainable, resilient, and inclusive growth.” 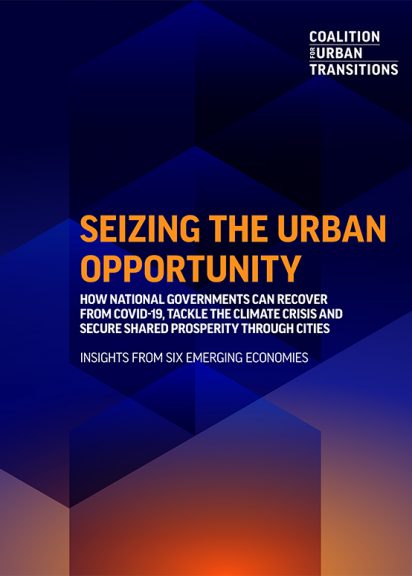