Species that can make us ill thrive in human habitats

Does the conversion of natural habitats to human use favour animals that harbour agents causing human disease? A global analysis of vertebrates provides an answer to this pressing question.

Examples of how land-use change increases the risk of zoonotic disease have been accumulating for decades. For example, rodents that amplify the abundance of pathogens that cause Chagas disease, several tick-borne illnesses and a suite of what are termed hanta-viral diseases thrive in human-dominated landscapes where other species have been lost. But the generality of this pattern, and the specific mechanisms that underlie it, have been questioned.

The analyses by Gibb et al. and others suggest that restoring degraded habitat and protecting undisturbed natural areas would benefit both public health and the environment. And, going forward, surveillance for known and potential zoonotic pathogens will probably be most fruitful if it is focused on human-dominated landscapes.

Read further the whole article from the source below.

The research assessed nearly 7,000 animal communities on six continents and found that the conversion of wild places into farmland or settlements often wipes out larger species. It found that the damage benefits smaller, more adaptable creatures that also carry the most pathogens that can pass to humans.

The assessment found that the populations of animals hosting what are known as zoonotic diseases were up to 2.5 times bigger in degraded places, and that the proportion of species that carry these pathogens increased by up to 70% compared with in undamaged ecosystems.The new analysis is the first to show how the demolition of wild places, as the world’s population and consumption grows, leads to changes in animal populations that increase the risk of disease outbreaks. The research demonstrates that disease surveillance and healthcare needs to be ramped up in those areas where nature is being ravaged, the scientists said. 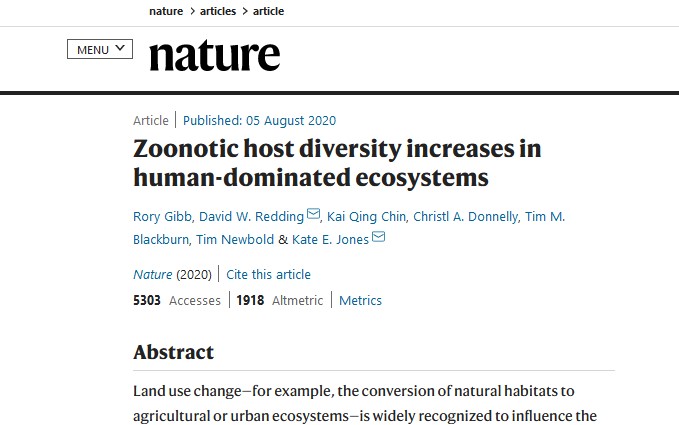