The State of Food and Agriculture (SOFA) 2020. Overcoming water challenges in agriculture

Intensifying water constraints threaten food security and nutrition. Thus, urgent action is needed to make water use in agriculture more sustainable and equitable. Irrigated agriculture remains by far the largest user of freshwater, but scarcity of freshwater is a growing problem owing to increasing demand and competition for freshwater resources. At the same time, rainfed agriculture is facing increasing precipitation variability driven by climate change. These trends will exacerbate disputes among water users and inequality in access to water, especially for small-scale farmers, the rural poor and other vulnerable populations.

The State of Food and Agriculture 2020 presents new estimates on the pervasiveness of water scarcity in irrigated agriculture and of water shortages in rainfed agriculture, as well as on the number of people affected. It finds major differences across countries, and also substantial spatial variation within countries. This evidence informs a discussion of how countries may determine appropriate policies and interventions, depending on the nature and magnitude of the problem, but also on other factors such as the type of agricultural production system and countries’ level of development and their political structures. Based on this, the publication provides guidance on how countries can prioritize policies and interventions to overcome water constraints in agriculture, while ensuring efficient, sustainable and equitable access to water.

How to overcome water challenges in agriculture

"Water should be recognized as an economic good that has a value and a price," it says, noting that customary practices leading it to be treated as a free commodity often create market failures. A price that reflects the true value of water, by contrast, sends a clear signal to users to use water wisely. At the same time, policy and governance support to ensure efficient, equitable and sustainable access for all is essential.

Between 2010 and 2050, harvested irrigated areas are projected to grow in most regions of the world and to more than double in sub-Saharan Africa, potentially benefiting hundreds of millions of rural people.

The report notes that, in some cases, small-scale and farmer-led irrigation systems can be more efficient than large-scale projects. That's a promising path for sub-Saharan Africa, where surface and underground water resources are comparatively undeveloped and only 3 percent of cropland is equipped for irrigation - and where expanding small-scale irrigation can be profitable and benefit millions of rural people

ABOUT: The State of Food and Agriculture, one of FAO's major annual flagship publications, aims at bringing to a wider audience balanced science-based assessments of important issues in the field of food and agriculture. Each edition of the report contains a comprehensive, yet easily accessible, overview of a selected topic of major relevance for rural and agriculture development and for global food security. FAO’s “The State of the World” publications provide a comprehensive overview of the most pressing global issues and challenges affecting the world today.

These global reports primarily target policy-makers and decision-makers, but are also relevant to experts, academia, students, the media and the general public. 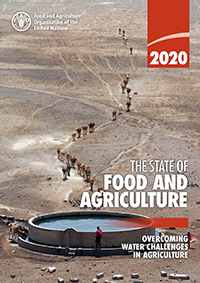