The report emphasizes the role of nature-based solutions – locally-appropriate actions that address societal challenges, such as climate change, and provide human well-being and biodiversity benefits by protecting, sustainably managing and restoring natural or modified ecosystems.

Adaptation – reducing countries’ and communities’ vulnerability to climate change by increasing their ability to absorb impacts – is a key pillar of the Paris Agreement on Climate Change. The agreement requires its signatories to implement adaptation measures through national plans, climate information systems, early warning, protective measures and investments in a green future.

The UNEP Adaptation Gap Report 2020 finds that while nations have advanced in planning, huge gaps remain in finance for developing countries and bringing adaptation projects to the stage where they bring real protection against climate impacts such as droughts, floods and sea-level rise.

Adaptation action is now widely embedded in policy planning across the world.
• Adaptation action is critical to enable public and private actors to prepare for and respond to the impacts of climate change.
• 72% of countries have adopted at least one national-level adaptation planning instrument, while a further 9% are in the process of developing one.
• Most developing countries are preparing National Adaptation Plans, a key mechanism to strengthen the focus on adaptation.
• Around half of countries’ planning documents address risks comprehensively, include relevant stakeholders and have dedicated planning processes in place.
• Progress in adaptation planning is expected to continue as rising climate awareness drives an increasing number of subnational initiatives.

However, the finance needed to implement these plans is not growing fast enough.
• International public adaptation finance is slowly rising, but there is not enough data to identify trends in domestic public or private finance.
• Annual adaptation costs in developing countries alone are estimated at USD 70 billion currently. This figure is expected to reach USD 140-300 billion in 2030 and USD 280-500 billion in 2050.
• Multilateral support for adaptation increased between 2013 and 2017 to 14.6% of the overall multilateral development finance. In contrast, bilateral adaptation support as a share of overall bilateral development finance increased slowly over the same period, from 4.6% to 6.1%.
Additional adaptation finance is critical to enhance adaptation and limit losses, particularly in developing countries.
• There are encouraging developments in finance. The Green Climate Fund (GCF) has allocated 40 per cent of its total portfolio to adaptation and is increasingly crowding-in private sector investment. Another important development is the increasing momentum to ensure a sustainable financial system.
• However, we need to scale up and incentivize both public and private adaptation finance to narrow the gap.
• Bringing in new tools such as sustainability investment criteria, climate-related disclosure principles and mainstreaming of climate-related risks into investment decisions can stimulate investments in climate resilience and direct finance away from investments that increase vulnerability.

Implementation of adaptation actions is growing, but there is yet limited evidence of climate risk reduction.
• Since 2006, close to 400 adaptation projects financed by multilateral funds serving the Paris Agreement have been undertaken in developing countries, half of which started after 2015.
• While earlier projects rarely exceeded USD 10 million, 21 new projects since 2017 reached a value of over USD 25 million.
• The Green Climate Fund, Least-Developed Country Fund and Adaptation Fund have together reached more than 20 million direct and indirect beneficiaries and trained more than 500,000 people on climate resilience measures.
• More than half of the adaptation projects supported since 2015 are being implemented in Least Developed Countries (LDCs) and almost 15% in Small Island Developing States.
• The majority focus on the most climate sensitive sectors, agriculture and water, with drought, rainfall variability, flooding and coastal impacts among the most commonly addressed climate hazards.
• Of over 1,700 adaptation initiatives surveyed, the majority were in early stages of implementation. Only 3 per cent reported bringing real reductions to climate risks posed to the communities where the projects were being implemented.

More and stronger implementation is needed to avoid falling behind on managing climate risks, especially in developing countries.
• Close to 40 new adaptation projects under the UN Framework Convention on Climate Change funds have been cleared to start, and 80 are in an advanced stage of the approval process. However, a lack of initial information on lasting outcomes raises concerns over effectiveness.
• Also, continued high levels of global emissions imply that implementation at current rates may not keep pace with increasing levels of risk.
• Enhancing adaptive capacity and resilience to climate impacts – for example through capacity building, empowerment, good governance and early warning systems – can markedly reduce vulnerability to climate hazards.

Nature-based solutions (NbS), one of the most cost-effective ways in the adaptation portfolio, has a potential to make a big contribution to climate change adaptation, but there are few tangible plans and limited financing available for them.
• In adaptation, NbS are mainly used to address coastal hazards, intense precipitation, heat and drought.
• More than half of countries, including over 90% of LDCs, refer to protecting nature as an important motivation for adaptation planning and have added elements of NbS to the adaptation components of their Nationally Determined Contributions under the Paris Agreement. However, most of these describe only broad goals and less than a third include measurable targets.
• At least 50% of the National Biodiversity Strategies and Action Plans, which countries develop under the UN Convention on Biological Diversity, emphasize the importance of NbS in addressing the vulnerability of species and ecosystems to climate change and other anthropogenic pressures.
• An analysis of four major climate and development funds suggested that support for green initiatives with some element of nature-based solutions has risen over the last two decades, although not enough.
• Cumulative investment for climate change mitigation and adaptation projects under the four funds stood at USD 94 billion. However, only USD 12 billion of this funding was spent on nature-based solutions. This is a tiny fraction of total adaptation and conservation finance.
• The high transaction costs of NbS mean that few of them can be financed as purely commercial ventures. The NbS finance base for adaptation could be strengthened and diversified by deploying innovative mechanisms that combine public and private sources of funding.
• There is also an urgent need to create the conditions and incentives that are required to enable, encourage and facilitate improved funding and investment flows.

The COVID-19 pandemic is expected to hit the ability of countries to plan for, finance and implement adaptation actions, disproportionately affecting the most vulnerable countries and population groups.
• While it is too early to gauge the full extent to which COVID-19 will affect global adaptation processes, in the short term the need to manage the direct public health impacts of the virus and its subsequent economic fallout has seen adaptation fall down the political agenda.
• In the longer term, the socio-economic consequences of the pandemic will likely put additional pressures on public finances and might change national and donor priorities in support of climate action.
• COVID-19 stimulus packages could lead to a more climate resilient and low-emission recovery if implemented well, but packages announced to date are largely missing the opportunity.

Reducing greenhouse emissions will reduce the impacts and costs associated with climate change, but the world must also plan for, finance and implement climate change adaption measures or face serious costs, losses and damages.
• Achieving the 2°C target of the Paris Agreement could limit losses in annual growth to up to 1.6 per cent, compared to 2.2 per cent for 3°C trajectory.
• All nations must pursue the efforts outlined in UNEP’s Emissions Gap Report 2020, which called for a green pandemic recovery and updated Nationally Determined Contributions that include new net-zero commitments.
• But everyone must also plan to adapt – as a moral responsibility to those nations least responsible for climate change but most at risk, and as an economic decision.
• Adapting to climate change makes economic sense. The Global Commission on Adaptation in 2019 estimated that a USD 1.8 trillion investment in adaptation measures would bring a return of USD 7.1 trillion in avoided costs and other benefits.
• While progress has been made on adaptation worldwide over the course of the last decade, further ambition and action, backed by finance, is urgently needed. 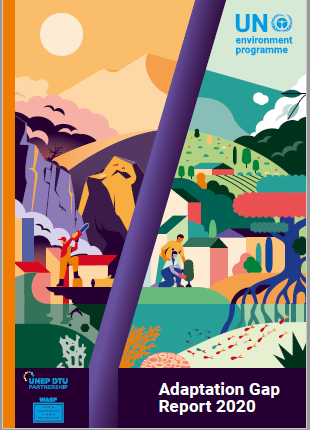