Sustainable Land Management - Approaches and Practices in Bosnia and Herzegovina

This publication introduces SLM and its principles and presents how good SLM practices in Bosnia and Herzegovina were documented, evaluated, selected and scaled through participatory land use planning processes.

High demand for agricultural products and raw materials produced on land is under adverse social and economic conditions and a lack of adequate investment. This situation puts pressure on decision-makers to move towards prioritizing short-term land use purposes rather than long-term ones, which means preserving or increasing their potential fertility and thus sustainability in the production of food and biomass in general, for the needs of the population and future generations. Such a prevailing short-term approach creates a disparity between the market price and the real economic value of the land, which often leads to its further overexploitation and, consequently, degradation.

As the amount of arable land is fixed, it is quite clear that its quality or production capacity must be enhanced, improved and preserved for future generations; otherwise, the natural forest and aquatic ecosystem will have to be converted into agricultural land, which will have irreversible consequences on the state of biodiversity and impact on the acceleration of climate change. What future scenarios concerning this resource can be expected, given that we are faced with new and increasing challenges that have arisen because of changing land use?

Land use change is most often associated with rapid and unplanned urbanization, intensive exploitation of raw materials, particularly in mining and generally in the production of solid fuel energy or hydro-accumulation, deforestation, population growth, mass migrations, expansion of agriculture due to increasing demand for food and raw materials accompanied by the increase in standards of living and construction of massive infrastructure.

The increasing incidence of extreme weather conditions and projected climate change are likely to exacerbate the extent and scope of land degradation and water scarcity in many parts of the world.

Different land management policies and strategies need to be implemented on a sustainable basis so that they are flexible and include many different instruments aimed at reversing land degradation trends towards preserving the land for the well-being of the planet Earth and for generations to come.

Incidentally, degraded land, where possible, needs to be restored, rehabilitated, or converted into biologically and/or economically productive areas that will generate direct benefits to the land user and prevent further conversion of this ecosystem.

This concept is also envisaged under the United Nations Convention to Combat Desertification (UNCCD) through Land Degradation Neutrality (LDN), which Bosnia and Herzegovina has accepted as its approach voluntarily.

„Agricultural land as a natural resource and property of general interest to the Federation and Bosnia and Herzegovina, enjoys special protection, is used for agricultural production, and cannot be used for other purposes, except in the cases and under the conditions laid down in this Law“. Arable land includes plough-fields, gardens, orchards, vineyards and meadows. Bosnia and Herzegovina, according to statistics (BHAS, 2018), has a total of about 1,843,832 hectares of agricultural land, and an overview of areas under a certain land use per capita (3.531.159 citizens according to the 2013 census).... 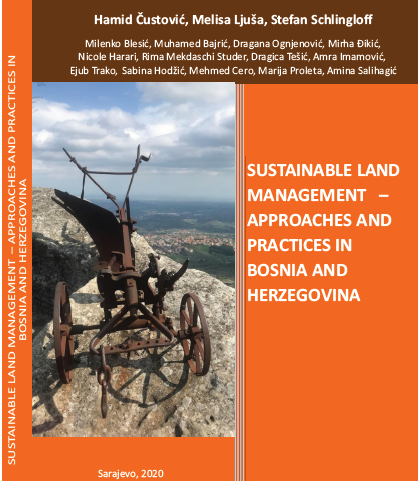