Women constitute the bulk of people who rely on land in many of the regions most affected by desertification, land degradation and drought. One in three people on earth depend directly on agriculture, while nearly 80% of employed women in least developed countries report agriculture as their primary livelihood. Food availability fluctuations also impact women’s role in food production and intra-family food distribution, with women often reducing their nutritional intake and that of their children, with dire health consequences.

Women’s input, knowledge and guidance are indispensable to any productive, sustainable efforts to avoid, reduce and reverse degraded land as mandated under the United Nations Convention to Combat Desertification (UNCCD). To realize the full potential of the new Land Degradation Neutrality (LDN) approach, the varied roles, priorities, contributions and influences of both women and men in land use and management must be understood, recognized and rewarded. Transformative LDN projects and programmes that overcome gender biases, integrate measures to promote women’s empowerment and foster inclusion and equal opportunities stand to leverage and gain co-benefits. Such efforts could also accelerate progress toward reaching multiple Sustainable Development Goals (SDGs), in particular those on advancing gender equality, ending poverty, improving food security, mitigating climate change and enriching life on land.

Healthy land is key to achieving many of the Sustainable Development Goals by 2030, from reducing climate change, biodiversity loss and poverty, to increasing equality, decent work and food security for nearly eight billion people. That’s why, with the productivity of a quarter of our land already diminished, over 120 countries have committed to set voluntary national Land Degradation Neutrality (LDN) targets, and joined the LDN Target Setting Programme to avoid, reduce and reverse such degradation. This policy brief shares the findings and recommendations from the technical data and policy reviews of the Programme to further strengthen those efforts.

In 2015, governments identified their priorities and objectives to achieve LDN, and then backed them with strong political statements. Reflecting that demand for urgent action, within a year, the Global Mechanism and the secretariat of the UNCCD and its international partners had established the LDN Target Setting Programme, which takes countries through a structured process to help leverage, assess, measure and achieve their commitments to LDN. Already, countries’ efforts to identify shared visions, achievable solutions, priority hot-spots and monitoring baselines have shaped a new data-driven approach to tackling land degradation. 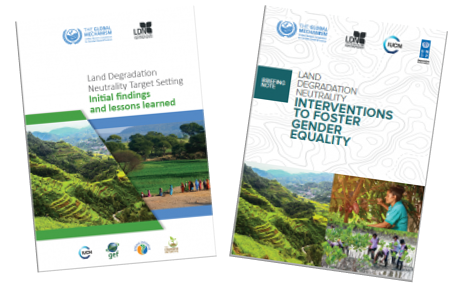