An estimated 931 million tons of food, metric tonnes that is, or 17 per cent of all food available to consumers in 2019, went into the trash of households, retailers, restaurants and other food services.

That’s according to a new report by UNEP.  To give you an idea, this amount roughly equals 23 million fully loaded 40-ton trucks — bumper-to-bumper, enough to circle the Earth seven times.

The report shows that most of this waste comes from households, which discard about 11 per cent of the total food available.  UNEP said that at a time when climate action is still lagging, 8 to 10 per cent of global greenhouse‑gas emissions are associated with food that is not consumed.  Reducing food waste would cut greenhouse emissions.  More information is available online.

The Food Waste Index Report 2021, from the United Nations Environment Programme (UNEP) and partner organization WRAP, looks at food waste that occurs in retail outlets, restaurants and homes – counting both food and inedible parts like bones and shells. The report presents the most comprehensive food waste data collection, analysis and modelling to date, and offers a methodology for countries to measure food waste. 152 food waste data points were identified in 54 countries.

Food waste has substantial environmental, social and economic impacts. For example, at a time when climate action is still lagging, 8%-10% of global greenhouse gas emissions are associated with food that is not consumed, when losses before consumer level are taken into account.

With 690 million people affected by hunger in 2019, a number expected to rise sharply with COVID-19, and three billion people unable to afford a healthy diet, consumers need help to reduce food waste at home.

Countries can raise climate ambition by including food waste in Nationally Determined Contributions to the Paris Agreement, while strengthening food security and cutting costs to households. This makes food waste prevention also a primary area for inclusion in COVID-19 recovery strategies.

“For a long time, it was assumed that food waste in the home was a significant problem only in developed countries,” said Marcus Gover, CEO of WRAP. “With the publication of the Food Waste Index report, we see that things are not so clear cut.

“With only 9 years to go, we will not achieve SDG 12 Target 3 if we do not significantly increase investment in tackling food waste in the home globally. This must be a priority for governments, international organisations, businesses and philanthropic foundations.”

Sustainable Development Goal (SDG) target 12.3 aims at halving per-capita global food waste at the retail and consumer levels and reducing food losses along production and supply chains. One of the two indicators for the target is the Food Waste Index.

To build on the work of the report, UNEP will launch regional working groups to help build countries’ capabilities to measure food waste in time for the next round of SDG 12.3 reporting in late 2022, and support them to develop national baselines to track progress towards the 2030 goal, and design national strategies to prevent food waste. This week, WRAP has launched the UK’s first national Food Waste Action Week (1-7 March), driving home the message that wasting food feeds climate change. 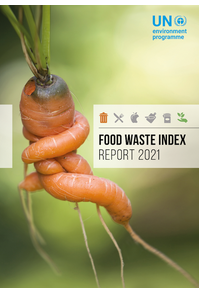