The world’s leading climate science organizations have joined forces to produce a landmark new report for the United Nations Climate Action Summit, underlining the glaring – and growing gaps – between agreed targets to tackle global warming and the actual reality.

The report, United in Science, includes details on the state of the climate and presents trends in the emissions and atmospheric concentrations of main greenhouse gases. It highlights the urgency of fundamental socio-economic transformation in key sectors such as land use and energy in order to avert dangerous global temperature increase with potentially irreversible impacts. It also examines tools to support both mitigation and adaptation.

“The Report provides a unified assessment of the state of our Earth system under the increasing influence of anthropogenic climate change, of humanity’s response thus far and of the far-reaching changes that science projects for our global climate in the future. The scientific data and findings presented in the report represent the very latest authoritative information on these topics,” said the Science Advisory Group, which is co-chaired by WMO Secretary-General Petteri Taalas and Leena Srivastava, outgoing Vice Chancellor of TERI School of Advanced Studies.

“Now, I believe in science. I believe in what has been considered . . . the most valid scientific position today,” said UN Secretary-General Antonio Guterres.

The  Special Report on Climate Change and Land stressed that land is already under growing human pressure and climate change is adding to these pressures. At the same time, keeping global warming to well below 2ºC can be achieved only by reducing greenhouse gas emissions from all sectors including land and food.

The report shows that better land management can contribute to tackling climate change, but is not the only solution. Reducing greenhouse gas emissions from all sectors is essential if global warming is to be kept to well below 2ºC, if not 1.5°C.

The United in Science Report has been created by the world’s leading climate science organizations who have joined forces to produce a unified assessment in preparation for the United Nations Climate Action Summit.

The report underlines the glaring and growing gaps between agreed on targets to tackle global warming and the actual reality, highlighting the urgency for the development and implementation of concrete commitments and actions. The current state of the planet, humanity’s response to date and the changes that are projected have been summarised in this landmark report.

The UN Environment Programme contributed two pages from its flagship report, The Emissions Gap Report, whose tenth edition is, released on 25 November. It assesses the latest scientific studies on current and estimated future greenhouse gas emissions, highlighting the gap of “where we are likely to be and where we need to be” and summarizes what is needed to get there. 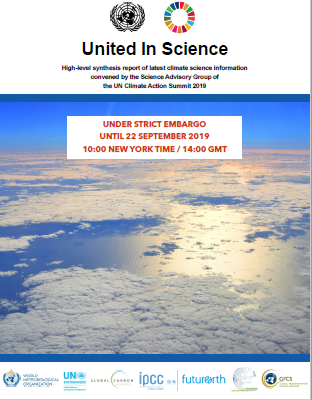